It’s amazing to think about how life evolved on this planet. Ever since our existence on this planet, the human brain has been curious to understand nature. This curiosity has been the mother of all inventions. There have been a number of theories to predict the same. One such theory is the Dalton’s Atomic Theory. We will learn about this theory and its postulates in this chapter. We will also look at is limitations. Let’s begin.

Matter has been one of the most important subjects of research for the science enthusiasts. Scientists and philosophers have always tried to simplify things. They wanted to know about the fundamental particles that make matter, their properties, structure etc. This led to the formulation of a number of atomic theories.

Democritus was the first man who proposed that matter is made up of particles. He named these particles, ‘atomos’ meaning indivisible. This was the Democritus’ Atomic Theory. Due to the lack of technological setup back then, scientists had very limited information on this theory.

Almost after two thousand years, the works on the simplifying matter was materialized by scientist, John Dalton. In 1808, John Dalton postulated the famous Dalton’s Atomic Theory. He published this theory in a paper titled “A New Chemical Philosophy”; indeed the philosophy was new for that era. Let us now look at the postulates of this theory.

However, this theory is not entirely free of limitations. Let us now look at the drawbacks of this theory. 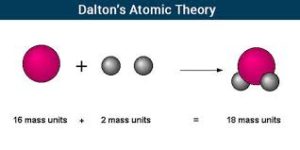 How do Scientists calculate the exact number of Atoms and Molecules? Find by learning Mole and Equivalent Weight here.

Q: Give the supporting laws for Dalton’s Atomic Theory.

Ans: John Dalton based his theory on two laws. They are explained below:

According to the law of constant composition, a pure compound will always have the same proportion of the same elements. For example, table salt with the molecular formula of NaCl holds the same proportions of the elements Na (sodium) and Cl (chlorine). This composition doesn’t depend on where the salt came from and how much salt one should have.