Badminton is an indoor game that is played with a lightweight racket and a shuttlecock. Historically, the shuttlecock was a small cork with a hemisphere with 16 geese that was attached and weighing about 5 grams. So, these types of the shuttle may still be useful nowadays. But the shuttles generally used are made from synthetic materials are also allowed by BWF which is a short name for a badminton world federation. So, the essay on my favorite game badminton is an insight into my favorite game and the rules and regulations followed around the world. 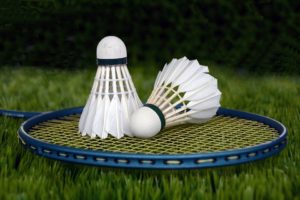 The name badminton is based on the country estate for the dukes of Beaufort in England. Also, the game was the first time playing there in 1873. Additionally, the roots of the game are further traced to ancient China, Greece, and India. Also, this game is said to be closely related to children’s game shuttlecock and battledore.

Also, there are a number of national, regional, and zonal tournaments which are held in many countries. One of the famous tournament in badminton is All-England championships. Additionally, the international and well-known tournaments include Uber cup and Thomas cup.

Badminton in the Olympics

Badminton was introduced in the Olympics for the first time in 1972 as a demonstration sport. While at the 1992 Olympics, this game was under the full medal category. Also, the competition included men’s as well as women’s doubles and mixed doubles were introduced in the 1996 Olympics.

Competitive badminton all around the world is played indoors because even the lightest of winds can affect the course of the shuttlecock. Also, recreational badminton is played outside and is a famous outdoor activity. The court for badminton is rectangular 13.4 meters long and 5.2 meters wide for the singles match. Also, the net is 1.5 meters high and stretches throughout the width of the court at its center.

Additionally, there is a clear space of 1.3 meters around the court that is needed. The play in badminton consists entirely of hitting and volleying the shuttlecock back and forth across the net. Also, it should be kept in mind that the shuttlecock should not touch the ground or floor within the court boundaries.