In this world, we must have laws to maintain peace. Thus, every citizen must follow these laws. However, there are some people in our society who do not follow them and break the laws. In order to keep a check on such kinds of people, we need the police. Through essay on police, we will learn about the role and importance of police. 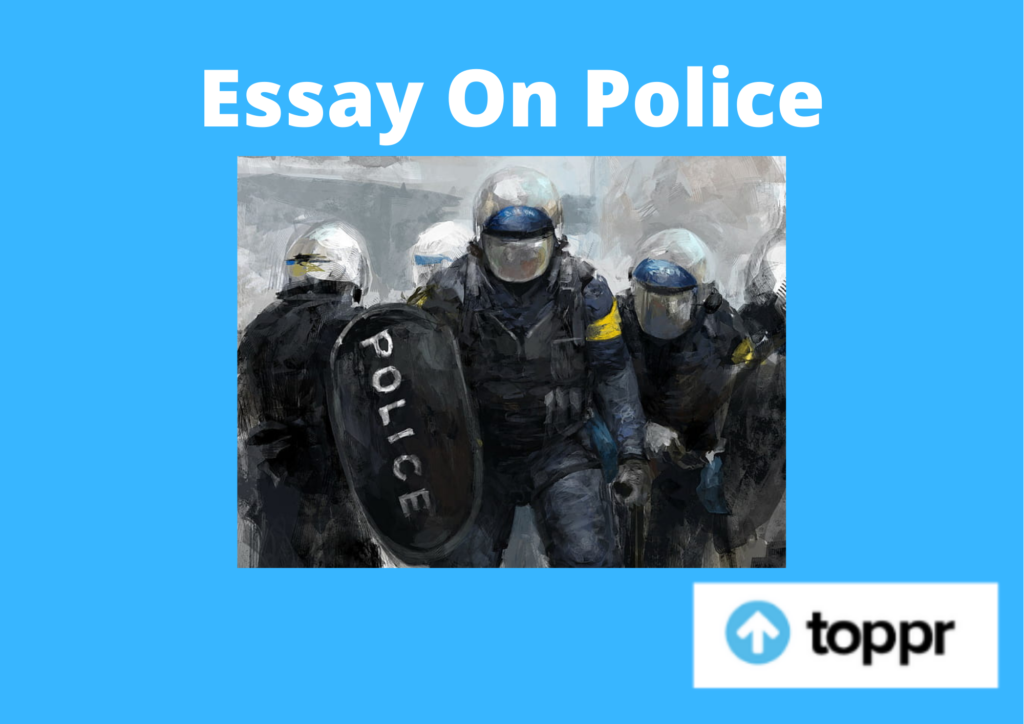 The police are entrusted with the duty of maintaining the peace and harmony of a society. Moreover, they also have the right to arrest and control people who do not follow the law. As a result, they are important as they protect our society.

Enforcing the laws of the land, the police also has the right to punish people who do not obey the law. Consequently, we, as citizens, feel safe and do not worry much about our lives and property.

In other words, the police is a saviour of the society which makes the running of society quite smooth. Generally, the police force has sound health. They wear a uniform and carry a weapon, whether a rifle or pistol. They also wear a belt which holds their weapons.

The police play many roles at police stations or check posts. They get a posting in the town or city depending on the crime rate in the area. When public demonstrations and strikes arise, the police plays a decisive role.

Similarly, when they witness the crowd turning violent during protests or public gatherings, it is their responsibility to prevent it from becoming something bigger. Sometimes, they also have to make use of the Lathi (stick) for the same reason.

If things get worse, they also resort to firing only after getting permission from their superiors. In addition, the police also offer special protection to political leaders and VIPs. The common man can also avail this protection in special circumstances.

Thus, you see how the police are always on duty round the clock. No matter what day or festival or holiday, they are always on duty. It is a tough role to play but they play it well. To protect the law is not an easy thing to do.

Similarly, it is difficult to maintain peace but the police manage to do it. Even on cold winter nights or hot summer afternoons, the police is always on duty. Even during the pandemic, the police was on duty.

Thus, they keep an eye on anti-social activities and prevent them at large. Acting as the protector of the weak and poor, the police play an essential role in the smooth functioning of society.

Conclusion of Essay On Police

Thus, the job of the police is very long and tough. Moreover, it also comes with a lot of responsibility as we look up to them for protection. Being the real guardian of the civil society of a nation, it is essential that they perform their duty well.

FAQ on Essay On Police

Question 1: What is the role of police in our life?

Answer 1: The police performs the duties which the law has assigned to them. They are entrusted to protect the public against violence, crime and other harmful acts. As a result, the police must act by following the law to ensure that they respect it and apply it in a manner which matches their level of responsibility.

Question 2: Why do we need police?

Answer 2: Police are important for us and we need it. They protect life and property, enforce criminal law, criminal investigations, regulate traffic, crowd control, public safety duties, search for missing persons, lost property and other duties which concern the public order.-*//**9666666666666666666666+9*63*

Share with friends
Previous
Essay On Horse
Next
Essay On Eid