Rani of Jhansi or Rani Lakshmi Bai’s maiden was Manu Bai. Manu Bai or Manikarnika was born to Moropant Tambe and Bhagirathi Tambe on 19th November 1828 at Kashi (Varanasi). At the small age of about 3-4 years, she lost her mother and was thus, brought up by her father alone. After the death of her mother, Manu Bai and her father shifted to Bithoor and started living with Peshwa Baji Rao. 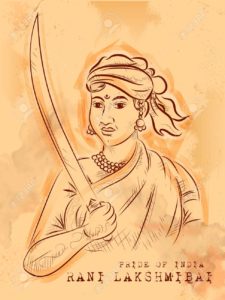 Since childhood, Manu was inclined towards the use of weapons. She thus learned horse-riding, sword fighting, and martial arts and mastered these. She was a beautiful, intelligent and brave girl. Manu spent her childhood in the company of Nana Sahib, the son of Peshwa Baji Rao II. She had great courage and presence of mind which she proved once while saving Nana Sahib from getting crushed by the horse’s feet.

Marriage with Maharaja of Jhansi

In May 1842, Manu got married to Raja Gangadhar Rao Newalkar, Maharaja of Jhansi, and was now known as Rani Lakshmi Bai. In 1851, she gave birth to Damodar Rao who died when he was just 4 months old. Thus, in 1853, Gangadhar Rao adopted a child and named him after his son, Damodar Rao. But, unfortunately, Gangadhar Rao died soon due to illness and Lord Dalhousie, the then Governor-General of India denied this adoption.

According to the Policy of Doctrine of Lapse, the British annexed all those states that did not have a legal heir to the throne. Thus, Lord Dalhousie did not approve of the adoption and wanted to annex Jhansi. Lakshmi Bai was enraged by this but eventually British annexed Jhansi. She made a couple of petitions against Lord Dalhousie but all her attempts proved futile.

However, in 1857 there broke out the first war of Indian Independence. The revolt soon spread to Delhi, Lucknow, Kanpur, Allahabad, Punjab, and other parts of the country. The revolutionaries declared Bahadur Shah Zafar as their King. Rani Lakshmi Bai also joined the revolt quickly and took command of the revolutionary forces. She captured the Jhansi fort on June 7, 1857, and began to rule as a Regent on behalf of her minor son, Damodar Rao.

On 20th March 1958, the British sent a massive force under Sir Hugh Rose in order to recapture Jhansi. She was supported by Tantya Tope. It was a severe battle in which both parties suffered heavy losses. Eventually the British recaptured the fort by betrayal. However, Rani Lakshmi Bai escaped with some of her loyal followers and reached Kalpi. Soon, with the help of Tantya Tope and Rao Sahib, she captured the Gwalior fort from Jivaji Rao Scindia.

Scindia asked the British for help and they willingly extended their support. In the battle, she fought bravely and with gallantry heroism. She was wounded by one of the English horsemen and collapsed. She fought with her son tied on her back and died with a sword in her hand. Ramachandra Rao, her loyal attendant immediately removed her body and lit the funeral pyre. Thus, the British could not even touch her. She martyred on 18th June 1858 at Kotah-ki-Serai in Gwalior.

Indian history has not yet witnessed a woman warrior as brave and powerful as the Rani of Jhansi, Rani Lakshmi Bai. She martyred herself in a struggle to attain Swaraj and liberate the Indians from the British rule. Rani Lakshmi Bai is a glorious example of patriotism and national pride. She is an inspiration and an admiration for a lot of people. Her name is thus written in golden letters in the history of India and will always stay in the heart of every Indian.