In living beings, the young ones have characters similar to their parents. These characters have been transferred from parents to offsprings. This transfer of characters maintains the continuity from generation to generation. Let’s find out more about Inheritance.

Similarities are maintained by the parent with the offspring from generation to generation but it is known that none of the two organisms are similar. Even different offspring of the same parent differ to each other. This is known as a variation, because of this variation each organism is different from the other organism in shape, behavior, color etc. Variation is divided into two parts:

Mendel was an Australian scientist. For seven years he did experiments on 28,000 plants. He worked hard and collected many observations. The rules of inheritance of characters depend upon the fact that there are two possibilities for each character to appear in offspring. In 1865 Mendel described all these possibilities of the appearance of characters in next generation in the form of laws. These are called the Law of Heredity or Inheritance.

Mendel crossed a pair of pea plants having two contrasting characters by a dihydric cross and observed characters of one gamete transmitted to next generation independently. 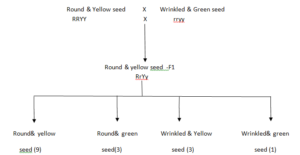 Q1. What is inheritance?

Q2. Give some examples of heredity variations.

Ans: Colour of eyes, hair, skin and blood group etc are some examples of hereditary variation.

Q3. What are the characters make us what we are?

Ans:  There are some traits or habits which we get from our family. Some things and skills we learn from our environment.