A computer is basically an electronic machine that can process information. However, the “process” could be anything. For example, it could be the addition or any other arithmetic operation. Otherwise, it could be just the instruction to group a given set of data or to ungroup it. Today’s computers have the power to carry out billions of calculations in a second and return results that are very accurate and reliable. How did it all happen? Where did it all start?

The computers of today find their roots in the second half of the twentieth century.  Later as time progressed, we saw many technological improvements in physics and electronics. This has eventually led to revolutionary developments in the hardware and software of computers. In other words, soon the computer started to evolve. Each such technological advancement marks a generation of computers. Let us begin with the first one. 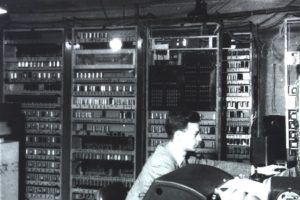 Computers developed between 1946 – 1959, are the first generation of computers. They were large and limited to basic calculations. They consisted of large devices like the vacuum tubes. The input method of these computers was a machine language known as the 1GL or the first generation language. The physical methods of using punch cards, paper tape, and magnetic tape were used to enter data into these computers.

Be updated and don’t get stuck in an exam. Prepare your General Awareness topics here.

Examples of the first generation computers include ENIAC, EDVAC, UNIVAC, IBM-701, and IBM-650. These computers were large and very unreliable. They would heat up and frequently shut down and could only be used for very basic computations.

Computers developed during the period of 1965 – 1971, the third generation of computers. These computers differed from the first and the second generations simply by the fact that a new circuit element like IC’s (Integrated Circuits) was used. An integrated circuit is a small device that can contain thousands and thousands of devices like transistors, resistances and other circuit elements that make up a computer. Jack Kilby is credited with the invention of the Integrated Circuit or the IC chips. With the invention of IC’s, it became possible to fit thousands of circuit elements into a small region and hence the size of the computers eventually became smaller and smaller.

Another salient feature of these computers was that they were much more reliable and consumed far less power. The input languages for such computers were COBOL, FORTRAN-II up to FORTRAN-IV, PASCAL, ALGOL-68, BASIC,  etc. These languages were much better and could represent more information. Consequently more and more complex calculations are possible

Fourth Generation of computers was between 1971 – 1980. These computers used the VLSI technology or the Very Large Scale Integrated (VLSI) circuits technology. Therefore they were also known as the microprocessors. Intel was the first company to develop a microprocessor. The first “personal computer” or PC developed by IBM, belonged to this generation. VLSI circuits had almost about 5000 transistors on a very small chip and were capable of performing many high-level tasks and computations. These computers were thus very compact and thereby required a small amount of electricity to run.

Examples are STAR 1000, CRAY-X-MP(Super Computer), DEC 10, PDP 11, CRAY-1. This generation of computers had the first “supercomputers” that could perform many calculations accurately. They were also used in networking and also used higher and more complicated languages as their inputs. The computer languages like languages like C, C+, C++, DBASE etc. were the input for these computers.

This is the present generation of computers and is the most advanced one. The generation began somewhere around 1981  and is the present generation of computers. The methods of input include the modern high-level languages like Python, R, C#, Java etc. These are extremely reliable and employ the ULSI or the Ultra Large Scale Integration technology. These computers are at the frontiers of the modern scientific calculations and are used to develop the Artificial Intelligence or AI components that will have the ability to think for themselves.

Q 1: The language used in ENIAC:

Ans: Basically ENIAC was a first generation computer and therefore the correct option is 1 GL.

Q 2: Which among these will have VLSI?

Q 1: You can use Java in which of these following generations:

Ans: D is the correct option.

Q 2: The ULSI technology is present in which generation of computers:

Ans: D is the correct option.

THANKS ,THIS IS THE VERY USEFUL KNOWLEDGE