Control is one of the foremost and most important functions of managers in organizations. So the organization has to put a control system in place to carry out this function. There are certain principles of control that should be implemented in this system of control. Let us take a look.

Principles of Control in Management

Let us take a look at the eight most important principles of control, 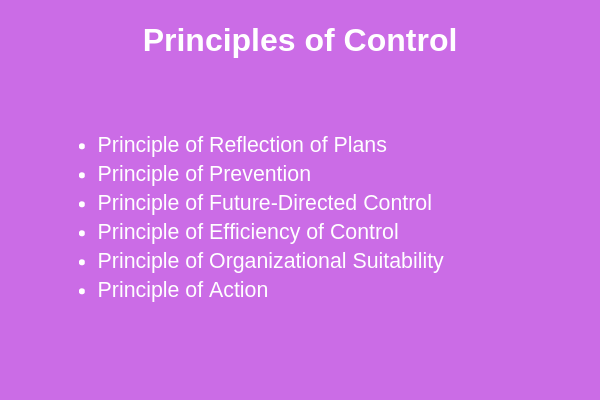 Principle of Reflection of Plans

Planning and control are two sides of the same coin, they go hand in hand. So if the firm has a clear and complete plan then it is much easier to make a control system for the firm. So a well-integrated plan means that the more effective the controls are.

The concept of ‘prevention is better than cure’ will apply to the control function as well. So the system of control must not only focus on improving deficiencies and solving the deviations from standards.

Instead, the focus should first be on preventing mistakes and deviations from the plan. If there are very few shortfalls in the first place, then the remedial action necessary is limited and manageable.

The function of control is not simply a feedback system. Actually, control is a feedforward operation.

Further, the managers here will be able to perceive any deviations from standards and shortfalls from the goals of the company. And then they can take action to prevent such an event from occurring.

Just like planning, control is a forward-looking function. With the help of relevant information, early signs, forecasting, and rapid response systems control should be directed towards the future.

Principle of Efficiency of Control

If the company goes overboard with setting up a control system, then, in the long run, it could be harmful to them.

A very extensive control system can be expensive and the cost benefits can disappear. So it is important that there is efficiency in the approach and techniques of the control system.

Deviations from plans, shortfalls, their causes, etc must be detected at minimum costs and without any unforeseen consequences.

So the control system must be cost-beneficial to the company. Not only in monetary terms, but adverse human consequences must also be avoided at all costs.

To have an efficient and effective control system, the organizational structure of the business must be clear and well integrated. This allows us to see where the responsibilities will lie for which actions.

The responsibilities of the plans must be pinpointed for better control by the managers. It will also help greatly with taking corrective actions when there are deviations from the plan.

The function of control is justified only if positive remedial action is taken. Only pointing out deviations or shortfalls from standards is not enough.

There has to be action to correct these deviations from standards through planning, organizing, leading, staffing and other such functions of management.

For effective control in the organisation, the company sets a common standard that needs to be achieved by the workers. If deviations noted, they will work on the drawbacks. This leads to the smooth functioning of the organisation

Principles of Assurance of objective

This ensures that by detecting the deviations in the work. The objectives of the company are achieved on a quick and more efficient basis

Q: In principles of control, what is the flexibility of controls?

Ans: If the controls are to be effective and efficient they must be flexible in nature. The plans of a business are also flexible to adapt to the change in circumstances, time, market, etc. So the control system must also be flexible.