Known as the second largest hydrological region in the world, the Ganga-Brahmaputra basin is also one of the oldest nurturers of people in the Indian subcontinent. The basin is one of the finest examples of the human’s interaction with the environment. Mapped in the northern half of the Indian subcontinent this basin of Ganga river and Brahmaputra river is the mother of many generations. Let’s see more! 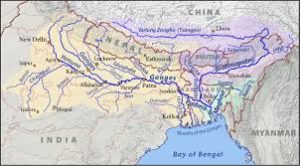 Ganga and Brahmaputra rivers originate from the Himalayas. After following their due course, Brahmaputra streams into other countries like Bangladesh, Bhutan, China and Nepal. It flows through the northern states on India namely Rajasthan, Haryana, Uttar Pradesh, and West Bengal.

As the largest densely populated basin in the world, the Ganga-Brahmaputra basin is also the highest fertile land of the sub-continent. The basin is a confluence of plains and mountains. What makes this basin different is its location.

Lying amidst the plains of Ganga river, and the Brahmaputra, the basin also has the Himalayas and Sunderban’s delta as its prominent features. Enriched with vegetation and life both, the Ganga-Brahmaputra Basin is a proud epitome of the endless interaction of Humans with the environment.

As the basin lies in the sub-tropical region of the Northern hemisphere of the planet, the climate here is hot in summers and cool in winters. Being a monsoon-dominated area, the basin faces heavy rainfalls between the months of June and September.

Population in the basin depends upon weather and environmental conditions. For example, we find a lesser population in mountainous areas of Ganga river and Brahmaputra as compared to the plain areas surrounding the basin. The steep slopes of the mountains here make this place inhabitable. The plain areas for various reasons like fertility and farming are the most opted by humans for settlements. The land near the basin is highly fertile and makes it perfect for agriculture.

Due to obvious reasons, agriculture is the main occupation practised in the basin. The main crops cultivated in this region is paddy while, maize, sorghum, millets, and grams are the secondary crops cultivated in the region. In some areas, cash crops like jute and sugarcane are also cultivated. Since the basin starts from north and halts in the northeast we find a variety of cultivation trends in the basin region. Apart from these crops, we also see banana plantation and Tea plantation. The main mode of agriculture here is Terrace farming.

Terrace farming is that kind of farming in which the slopes are cut into steps. Thus helping in enriched cultivation results, using terrace farming for growing crops does not let the soil lose its fertility. Being a monsoon prone area it is essential terrace farming in the basin not only helps in the increasing cultivation but also soothes problems related to infertility and soil erosion. 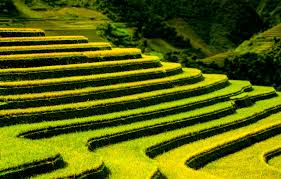 Vegetation Cover of the Basin

The basin shows varied trends in vegetation, which depend on the kind of landforms around the basin. We find tropical deciduous trees alongside the Ganga river and the Brahmaputra. Some common trees here are Sal, Teak and Peepal. The Brahmaputra’s plain particularly is home to Thick Bamboo groves while the delta region has plenty of mangrove forests.

As we descend down the basin and reach Sikkim and Arunachal Pradesh we find coniferous trees like Deodar, Pine and Fir. Since the temperature in these areas is comparatively cold here, coniferous trees are present in abundance here.

The Ganga Brahmaputra basin is house to a varied wildlife as well. Tigers, Elephants, Deer and monkeys are the most common. Apart from these one-horned Rhinoceros, crocodiles, alligators and Bengal tiger are a common sight in the delta. Rohu, Hilsa, Catla and Susu (Blind Dolphin) are the aquatic animals present in abundance in the rivers and lakes adjoining the basin.

The basin has many diverse modes of transport. Owing to its importance due to its adjoining with prominent cities all the four modes of transport are present here. Ganga Brahmaputra Basin has been witness to many generations of mankind in the Sub-continent. Therefore it is a splendid example of human interaction with the environment.

However, due to growing population and unending aspirations of humans, the basin has started to show signs of depletion. The pollution, both of air and water in the near future can ruin the ecology of the basin. The signs of are alarming, but the actual effect could be a disaster, for us and the environment both!

Learn more about Life in the Amazon Basin here in detail.

Q 1: What type of soil is available in the Ganga-Brahmaputra basin?

Solution: C) Ganga-Brahmaputra is a river basin. As a result, it gets flooded every now and then. Therefore the bulk of the soil present in the basin region will be alluvial soil.