Human beings are the most brained creatures. As humans, we excel in exploring the mother Earth and using it for our best purposes. This skill of ours has given us the advantage of interacting with the environment, and Amazon basin is the best living example of that. Amazon basin is the result of the many tributaries joining the Amazon river. Let’s explore the human capacity to interact with the environment.

This region is also referred as the equatorial region. The Amazon river flows through the region and reaches the Atlantic Ocean through the mountains in the west. Before reading further about Amazon basin it is important that we know the following definitions:

Amazon basin is the result of the many tributaries that flow into the Amazon river. Amazon basin passes through some parts of Brazil, parts of Peru, Bolivia, Ecuador, Columbia and a tiny part of Venezuela. The Amazon river is home to thousands of unique species of flora and fauna. As a result, the Amazon river has been home to many wonderful civilizations like ancient Mayans and the Incas etc. Let’s throw a light on the various features of the Amazon basin. Amazon basin is situated in the equatorial region which is hot and humid all through the year. Days and nights both are equally hot and wet. Nights are comparatively less hot but the humidity level remains unchanged. Due to the humid conditions here, it rains almost every day.

As it rains throughout the year the forests here are dense. The trees form a dense roof of leaves that do not even let sunlight penetrate into the forest area. Also, the surface of the earth is damp and dark. So shade tolerant vegetation is present in abundance here. Prominent plant parasites found here are Bromeliads and Orchids. The rainforests of Amazon basin are flocked with a variety of fauna as well. As a result, you can find the rarest of species loitering in the forests here.

Hummingbird, Toucans, Amazon Kingfisher, Hyacinth Macaw, Blue-fronted Amazon are some of the bird species that are present here. And animals like Sloth, Capybara, monkeys, ant-eating tapirs, poison dart frogs are present all over the rainforests of Amazon. The list does not end here! You get a glimpse of the grandest of the reptiles as well.

Crocodiles and snakes like Pythons and Anacondas are common here. Apart from these aquatic animals like the Piranha and Giant Otter can be sighted in the river basin. The list of fauna and flora in Amazon Basin is endless. 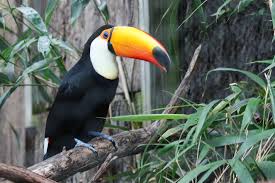 People here cut a few trees and cultivate the land according to their needs and requirements. Men have occupations like fishing and hunting, while it’s the women who take care of the crops and fields. The land being near the Amazon river is very fertile which makes it a good for farming. People here generally grow crops like Pineapple, Tapioca, Sweet Potato, Cassava (manioc), Coffee, maize, and cocoa. We call them the Cash crops.

As already said, men practice fishing and hunting which are uncertain means of living. It is the women of Amazon basin who are the major bread earners of the family. From taking care of fields to feeding their families with the vegetables that they cultivate, women are responsible for their families well-being.

They practice slash and burn technique of agriculture. In slash and burn agriculture system, we clear the required forest land for farming. We slash or cut down the trees and bushes. As soon as the fertility of land degrades, women proceed to clear a new piece of land.

The old land eventually gains back its fertility with trees and bushes growing back on them. Manioc or Cassava is the staple food while queen ants and egg sacs are the other savouries of people near the Amazon river. The indigenous people have been shifted to newer places so that they practice their distinctive skill of farming.

People live in special kind of houses called the Maloca here. These houses have steep slant roofs and are large and apartment like in shape. People also reside in houses that are identical to beehives and have thatched roofs over them. Since the settlements here are in close proximity of forests, people find wood in abundance for their personal use. 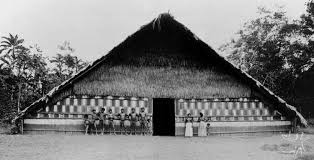 With pacing technology and modernism, the life of people is slowly changing here. As it is the human nature to evolve and enjoy facilities to their best the advent of transportation has helped in easy navigation through the basin. An area which once was navigable only through the Amazon river can today be explored through Trans-Amazon Highway. Moreover, with aeroplanes and helicopters, it has become easier and faster to reach various places around the basin.

Human Interaction with environment benefits humans, but after an extent depletes the environment. The regular felling of trees in the Amazon basin has resulted in a change of ecology here. The developmental activities near the Amazon river, eventually, have resulted in the destruction of the rainforests. The effects may not be visible today, but in the near future, they surely will. The map below signifies the change human interaction has brought to the environment: 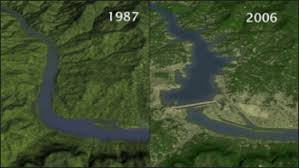 Amazon Basin is the richest example of human interaction with the environment. To let it stay rich with vegetation it has now become imminent to use the resources from the basin intelligently. We humans interact with the environment for our benefits but doing so at the cost of ecology can be fatal for our generations to come.

Q1: Define the major difference between a hamlet and a village.

Solution: A) Villages are larger than hamlets. They have a greater population than hamlets. Hamlets are small towns and community while as villages are mostly large suburbs and crossroads. Hence, Hamlet settlements are also less polluted as a result of a smaller population.

Q2: From where the Urban settlements have evolved?