Deformation is a natural phenomenon that occurs on our earth. When we look at it from the point of view of earth science, we see it is a process responsible for altering the shape and size of a rock.

Ever looked at the rocks and wondered how each of them is so unique? We often notice that different rocks have different kinds of lines and swirls which do not repeat in any other rocks. Deformation is what is responsible for these patterns. 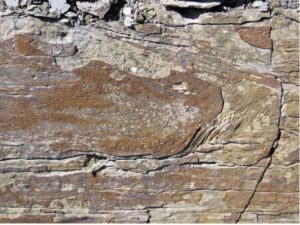 It mainly happens due to stress which can be said a force applied to the specific area. Furthermore, there are various reasons for this process to happen.

For instance, change in temperature, shifting of earth’s plate sediment build-up and more can cause it easily.

We can divide the types of rock deformation into four types. The first one is elastic deformation in which it is temporary and it reverses when the source of stress removes.

In other words, if an area is capable of returning to its original shape, it is elastic deformation.

Further, we have ductile deformation. It refers to when the process is irreversible. In other words, it happens when the crust of the earth folds or bends without breaking, causing it to change its shape or size permanently.

On the other hand, brittle deformation is when the rock breaks due to stress. It happens due to a fracture or rupture and this is also irreversible.

Moreover, we have plastic deformation. It refers to when the area does not recover from the change that happens in its shape.

There are a lot of factors responsible for the type of deformation rock experiences when they get exposed to stress. One is the type of rock which is experiencing the change. Then there is the rate of strain and finally the pressure and temperature.

For example, ductile deformation happens due to higher temperatures and pressure. This is why rocks near the surface of the earth are more ductile.

Similarly, we see that rocks are also under constant pressure causing them to change their shape over the course of time.

This change happens due to stress only which is a force that applies over an area. Thus, we see that if stress is applied uniformly, the rock won’t change, that is called confining stress.

Then, we have differential stress where force is not applied equally. This directional stress further divides into three kinds which are:

Tensional Stress- It expanses rocks. Over time, this outcome in the creation of valleys. Tensional stress is produced by the crust being pulled in opposite directions.

Compressional Stress- This kind of stress creates tall mountain ranges like the Himalayas and Smokey Mountains.

Compressional stress is the outcome of two large pieces of the Earth’s crusts, such as two continental plates, ramming with each other.

Shear Stress- Fault lines are the outcomes of shear stress. Shear stress occurs when two plates rub against each other in contrasting directions.

It is produced by two plates moving past each other and outcomes in a fault line, like the San Andreas Fault.

Question– Which of the following is not a type of directional stress?

Share with friends
Previous
What is an Alloy? - Definition and Examples
Next
Agate - Definition, Types, Uses