The term Kathak is derived from the Vedic Sanskrit word Katha which means “story”, and Kathaka which means “the one who tells a story”, or “to do with stories”. One of the major Indian Classical dance forms, its origin is traditionally attributed to the travelling bards of ancient northern India known as Kathakars or storytellers.

Thus Kathak is not merely a dance but an expression of a story. How beautiful! Let us explore more about this enchanting dance form as well as its origin and significance in regional cultures. 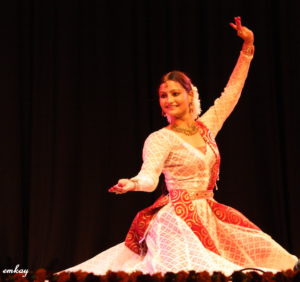 Presumably, originating in Banaras or Varanasi it spread its wings to other parts such as Jaipur, Lucknow as well as many other regions of north and northwest India. This dance form has been heavily inspired by the heroic traditions of various regions. The dance form was an integration of basic gestures of storytellers with traditional folk dance.

The Lucknow Gharana is a form of Kathak founded by Ishwari Prasad, a devotee of the Bhakti movement. It has a peculiar story behind its origin. A resident of Handiya village towards the southeast Uttar Pradesh, it is believed that Lord Krishna appeared in his dreams and instructed him to develop “dance as a form of worship”. Subsequently, the dance form was taught by him to his sons which were then passed down to their descendants.

This tradition continued for more than six generations thus carrying forward this rich legacy. It came to be acknowledged as the Lucknow Gharana of Kathak by Indian literature. It took its inspiration from the legends of Lord Krishna and his eternal love Radha depicted in texts like the ‘Bhagavata Purana’. The stories of Radha and Krishna were beautifully captured and depicted in folk plays known as “rasalila” which were performed by Kathak artists.

As the Indian freedom movement progressed in the early 20th century, it witnessed efforts being undertaken amongst Indians in order to revive national culture and tradition and rediscover the rich history of India in order to resurrect the very essence of the nation. Kalkaprasad Maharaj played a significant role in drawing an international audience to Kathak at the beginning of the 20th century.

As in case of all major Indian Classical Dance forms, Kathak starts with the part where the performer offers an invocation to Hindu gods and goddesses through a series of hand gestures known as “mudras” as well as facial expressions. “Nritta” represents pure dance where the dancer initially performs a sequence involving elegant and slow movements of various body parts like eyebrows, neck as well as wrists following which she adjusts her speed according to the beats of the music.

Que: The kathaks were originally a caste of _________ in temples of north India, who embellished their performances with gestures and songs.

Ans: The correct option is b. Storytellers.

Share with friends
Previous
Towns, Traders and Craftspersons
Next
The Making of Regional Cultures