In the later Vedic period, the complex rituals and sacrifices were advocated but these were not acceptable by common people. The people got confused by the superstitious beliefs the sacrificial ritual was also found to be too expensive for the people. Hence, Jainism and Buddhism were started. So, do you want to understand the thinking of human heart and mind? From where the peace was born. Then let’s know about Buddhism and Jainism.

Around 2500 years ago Gautama was born in a Lumbini garden near Kapilavastu who was the founder of Buddhism. He was a Kshatriya and belonged to Satya Gana. By seeing the sight of an old man, the deceased man, a corpse and an ascetic he went away from this worldly life. 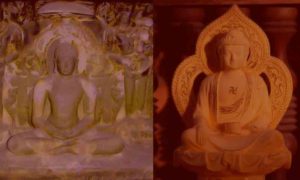 In search of knowledge and the truth, he left home at the age of 29. For several years he wandered and met several teachers and discussed with other thinkers but could not get enlightenment. At last at Bodh Gaya in Bihar, he got Nirvana under a peepal tree at the age of 35. Then he came to be known as Buddha or the ‘Enlightened one’.

Check out our detailed article on Buddhism here.

Mahavir was a Kshatriya prince and famous thinker of Jains. He was a contemporary of Buddha. He left home at the age of 30 and got the enlightenment after 12 years. His followers were named as Jainas. Jainas derived from a term Jina which means conqueror.

In Prakrit, he taught the men and women who wanted to understand the truth. The three principles of Jainism are right faith, right knowledge and right conduct which are known as Titrants. Jainas had to lead a very simple life, even if for food they had to beg and they had to detect celibacy. The written teachings of Mahavir is presently available at a place called Valabhi in Gujarat.

The text in the Upanishads contain the conversations between teachers and students. The actual meaning of is Upanishads is “approaching and sitting near”.  These all are the part of the important elaboration of the later Vedic texts. Thus its graphics and assumptions were called Vendata.

The main aim of Upanishads is to generate a desire among people for knowledge to achieve Moksha. It focused on the fact the knowledge of Atman should be taught. It related to with Parmatman. Maximum Upanishads intellectuals were men, especially Brahmins, and rajas. Gargi was one of the female thinkers who is famous for her learning and participated in debates that were held in royal courts.

Both Buddha and Mahavir felt that only who left their homes only they can get true knowledge so for then they formed sangha. The rules for this Sangha was mentioned in a book named as Vinaya Pitaka.

Check out our detailed article on Jainism here.

Q1. Which questions are there that Upanishadic thinkers wanted to know?

Sol. They wanted to know the life after the death. Some of them desired to know why sacrifices should be done. They sensed that in the universe something permanent should be there which one should have lasted even after death. In Upanishads, their idea is recorded.