Institution for settlement of Industrial Disputes

It refers to the process in which representatives of employees and employers come together to a third party in a view to discuss the dispute and reconcile their differences and conclude to an agreement by mutual consent. 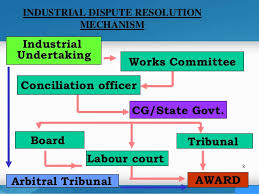 Arbitration:  It is a process where a neutral third party hears to the parties in disputes, gather the information regarding the dispute, and then come to conclusion and decide the matter which is binding on both the parties.

The difference between both the officers as, conciliator only assists the parties to conclude to a settlement, whereas the arbitrator hears to both the parties and then passed his judgment.

Pros and cons of Arbitration in Industrial Disputes

It is the final legal option for settlement of Industrial Dispute. it means a legal authority appointed by government who intervenes in order to make a settlement which is binding on both the parties.

In other words, a settlement of an Industrial dispute by a labour court or a tribunal is mandatory. For the process of adjudication, the Act provides a piece of 3-tier machinery. 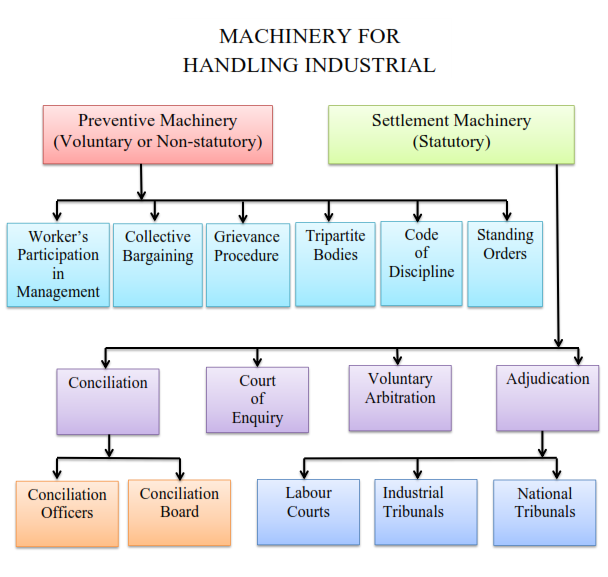 For the adjudication of industrial disputes relating to the specified matters in the second schedule of the act, the appropriate government may by notification constitute one or more labour court. Powers of labour courts are:

For the adjudication of the industrial disputes, the appropriate government may, by notification constitute one or more industrial tribunals. Matters relating to the following are:

The central government may, by notification in the official Gazette, constitute one or more National Tribunals for the adjudication of Industrial Disputes in:

Q1) Which statement is the correct objective of the Industrial Disputes Act?

ANSWER: d) All of the above

Q2) Which machinery for settlement mentioned in this act accountable for the speedy of industrial disputes?

Q3) What is the time period to publish the arbitration report by the appropriate government?

ANSWER: a) Negotiation and Adjudication