Bayes’ Theorem formula is a very important method for calculating conditional probabilities. It is used to calculate posterior probabilities under some already give a probability. This theorem describes the probability of an event, based on conditions that might be related to the event. For example, a patient is observed to have a certain symptom. Here the Bayes’ formula can be used to compute the probability that a diagnosis is correct, with the given observation. In this topic, we will discuss conditional probability and Bayes’ theorem Formula with examples. Let us learn the interesting topic.

What Is Conditional Probability?

We can write the conditional probability as \(P(A | B)\), the probability of the occurrence of event A given that B has already happened. 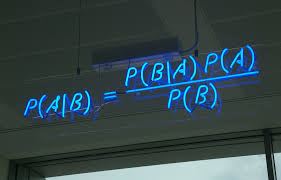 Bayes’ theorem is named after Thomas Bayes. He first provided an equation that allows new evidence to update beliefs. If we know the conditional probability \(P(B | A)\)  , we can use the Bayes rule to find out the reverse probabilities \(P(A | B)\) as well. This theorem says that,

Now, we use the Bays theorem formula:

Therefore, if a patient has hay fever, then chance of having rheumatoid arthritis is 14 percent.