In this lesson, students will learn about the absolute basics of Percentages. The purpose of this lesson is to help the student to get an answer one simple question related to percentage. We make a lot of use of percentage calculation in our day-to-day life. A percentage is a portion of a whole expressed as a number between the zero and 100 rather than as a fraction. Thus all of something is 100 percent. Sometimes to know the discounts on the price value the percentage formula proves much important. In this topic, we will discuss the percentage formula with examples. Let us learn it! 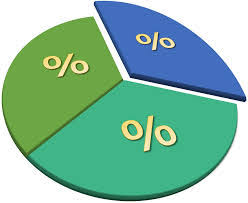 Table of content
1 Percentage Formula
1.1 What is the Percentage?
1.2 Formula for Percentage
1.3 Some important tips are given as follows:
2 Solved Examples

What is the Percentage?

To calculate p % of q, use the following formula:

Steps to find out percentage value:

Some important tips are given as follows:

Basic Tip-2: When a quantity n is increased by k %, then the:

Basic Tip 3: When a quantity p is decreased by k %, then the:

To determine the percentage value we divide the portion of the whole by the whole itself and then multiply it by 100. Therefore, if we just ate two pieces of an eight-piece pie, then we may calculate the percentage of the pie which we have consumed.

First, we will divide 2 by 8 which will be o.25. Then multiply 0.25 by 100 to get 25 percent. A percentage may also mean a portion of something but only when it has to do with numbers. When we buy furniture, then the salesman gets a percentage of what we spend.

Solution: Let the number be x.

Solution: Let the number be y.