Pythagorean Theorem is one of the most fundamental and basic theorems in mathematics. It defines the relationship between the three sides of a right-angled triangle. This article will explain the Pythagorean Theorem Formula with examples and derivation. Let us learn the concept!

What is Pythagorean Theorem?

We are already aware of the definition and properties of a right-angled triangle. In this triangle with one of its angles as a right angle, it means 90 degrees. The side which is opposite to the 90-degree angle is termed as the hypotenuse. The other two sides which are adjacent to the right angle are called legs of the triangle.

The Pythagorean Theorem is a very useful formula for determining the length of a side of a right triangle. This formula has many direct and indirect applications in the geometrical derivations and applications. In the triangle, the hypotenuse is the longest side.

We may easily locate the longest side by looking across from the right angle. The other two legs will be base and perpendicular, which are making a 90-degree angle. There is no specific rule to consider the side as base or perpendicular. It does not matter at all. 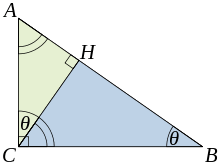 The Formula of Pythagorean Theorem

So, mathematically, we represent the Pythagoras theorem as:

Derivation of the Pythagorean Theorem Formula

Hence it is the Pythagorean Theorem.

Application of this theorem in real life:

The following are some of the applications of the Pythagoras theorem:

Q.1: Find the hypotenuse of a right-angled triangle whose lengths of two sides are 4 cm and 10 cm.

Solution: Given parameters are:

Using the Pythagoras theorem we have

Now, substituting the values we will have:

Hence the hypotenuse of the triangle is 10.77 cm.