Definition of Adjoint of a Matrix

The adjoint of a square matrix A = [aij]n x n is defined as the transpose of the matrix [Aij]n x n, where Aij is the cofactor of the element aij. Adjoing of the matrix A is denoted by adj A. 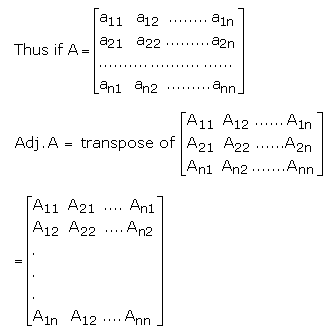 Find the adjoint of the matrix:

Solution: We will first evaluate the cofactor of every element, 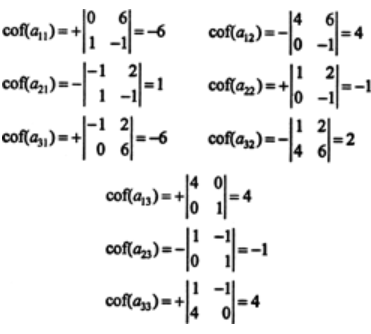 The Relation between Adjoint and Inverse of a Matrix

To find the inverse of a matrix A, i.e A-1 we shall first define the adjoint of a matrix. Let A be an n x n matrix. The (i,j) cofactor of A is defined to be

The inverse is defined only for non-singular square matrices. The following relationship holds between a matrix and its inverse:

Determine whether the matrix given below is invertible and if so, then find the invertible matrix using the above formula.

Solution: Since A is an upper triangular matrix, the determinant of A is the product of its diagonal entries. This, we have det(A) = -1, which is a non-zero value and hence, A is invertible. To find the inverse using the formula, we will first determine the cofactors Aij of A. We have,

Then the adjoint matrix of A is

Using the formula, we will obtain the inverse matrix as 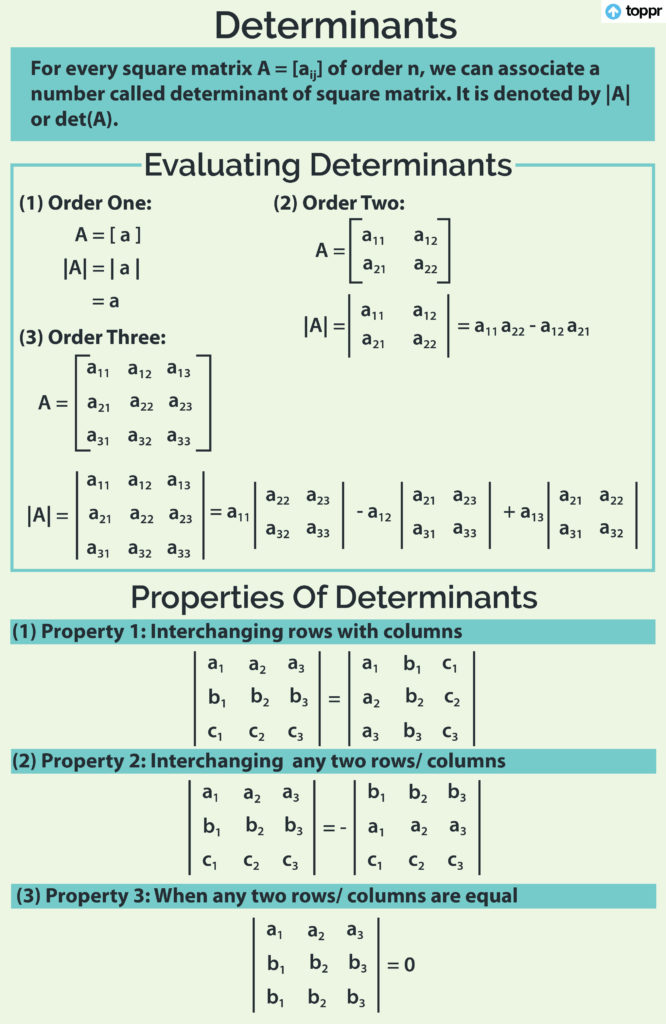 Theorems on Adjoint and Inverse of a Matrix

Since the sum of the product of elements of a row (or a column) with corresponding cofactors is equal to |A| and otherwise zero, we have

Remark: We know that

Writing determinants of matrices on both sides, we have

A square matrix A is invertible if and only if A is a non-singular matrix.

Proof: Let A be an invertible matrix of order n and I be the identity matrix of the same order. Then there exists a square matrix B of order n such that AB = BA = I. Now, AB = I.

Thus A is invertible and

Question 1: With 1, ω, ω2 as cube roots of units, inverse of which of the following matrices exist?

Answer: Option D. Inverse of a matrix exists if its determinant if not equal to 0. For option A, B and C, the determinants are equal to zero, hence the inverse does not exist for any of the given matrices.

Answer: For a 2×2 (with two variable) Cramer’s Rule is another method than can solve systems of linear equations using determinants. Moreover, a matrix is an array of numbers enclosed by square brackets.

Question 4: Is inverse and transpose the same?

Answer: Matrix has an inverse if and only if it is both square and non-degenerate. Also, the inverse is unique. Besides, the inverse of an orthogonal matrix is its transpose. Moreover, they are the only matrices whose inverse are the same as their transpositions.

Answer: Transpose refers to a matrix of an operative that tosses a matrix over its diagonal, that is it switches the row and column indices of the matrix by producing another matrix denoted as \(A^{T} or {A}’, A^{tr}, ^{t}\textrm{A}\).

Yes, it is only defined for square matrices.

It actually is. It is equal to zero for all non-square matrices.

you mean if the determinant os non zero