What is a matrix? Ever wondered what do the elements in a matrix mean? Why is it represented in a particular form? Why do we study a matrix? Does it really have any real-life application? I would say yes, matrices are the most important and are a basic part of maths which are used in higher studies and real-life problems.

Matrices are one of the most powerful tools in mathematics. The evolution of the concept of matrices is the result of an attempt to obtain compact and simple methods of solving the system of linear equations. Let’s find what is a matrix and its applications.

Table of content
1 Suggested Videos
2 Definition of a Matrix
3 What is a Matrix?
3.1 Browse more Topics under Matrices
4 Order of a Matrix
5 Application of Matrices
6 Solved Examples For You

Definition of a Matrix

What is a Matrix?

Let us now suppose that we wish to express the information of possession of pens and pencils by Ram and his two friends Rohan and Yash which is as follows:

Now, this could be arranged in tabular form as follows, 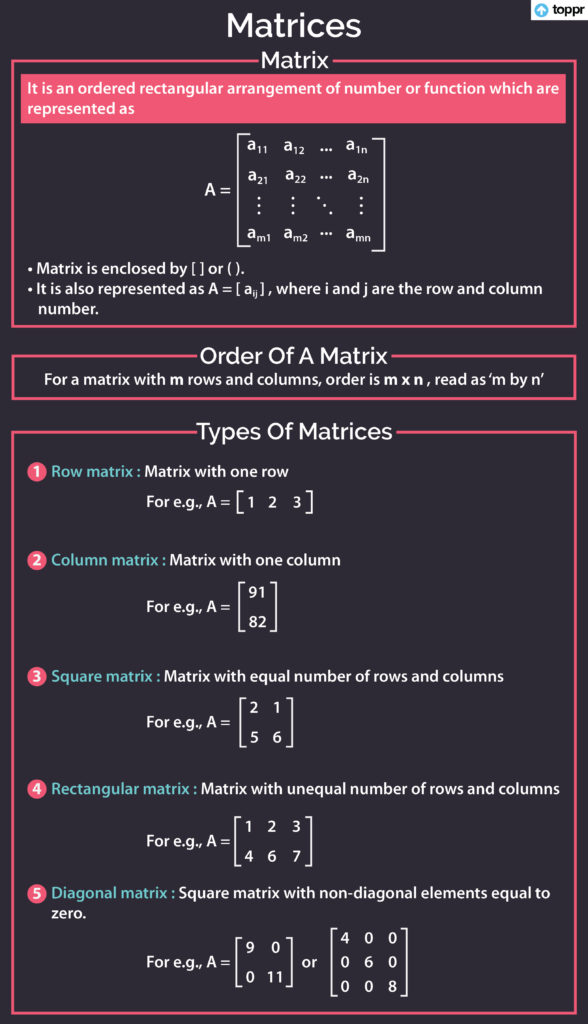 Order of a Matrix

A matrix having m rows and n columns is called a matrix of order m × n or simply m × n matrix (read as an m by n matrix). In general, an m × n matrix has the following rectangular array;

Most Scientific Fields have Applications of Matrices in some or the other form. Almost every branch of physics, including classical mechanics, optics, electromagnetism, quantum mechanics, and quantum electrodynamics, matrices are used to study physical phenomena, such as the motion of rigid bodies.

Matrix calculus generalizes classical analytical notions such as derivatives and exponentials to higher dimensions. The graphics software uses the concept of a matrix to process linear transformations to render images.

Question 3: Give a simple definition of matrix?

Answer: A matrix refers to a collection of numbers such that their arrangement is into a fixed number of rows and columns. Usually, matrix deals with real numbers. A matrix displays data in a structured format.

Question 4: Explain the elements in a matrix?

Answer: A matrix refers to a rectangular array of numbers arranged in columns and rows. Elements in a matrix refer to the numbers that exist in the rows and columns of a particular matrix.

Question 5: Name the types of matrix?

Question 6: What is meant by matrix multiplication?