Perimeter and Area of Figures: Suppose you are planning to construct a new house, and you want to put the fence around the property. The most important thing you need to know is perimeter. But what does perimeter mean? Let us find an answer to this in the article below.  Let us study the topic Perimeter and area of figures in detail.

Perimeter and Area of Figures

The perimeter is the distance around the object. For example, your house has a fenced yard. The perimeter is the length of the fence. If the yard is 50 ft ×  50 ft your fence is 200 ft long. Area and perimeter are very important terms which can be applied to any shape of the figure.

The area is a measure of the space contained within an object. In the same yard, an area is a measure you need to be to start a lawn. The area has units of distance squared. For a 50 ft × 50 ft you need 50 × 50 = 2500 sq feet of grass. So let us find out the area and perimeter of the figures like rectangle and square.

The area is the amount of two-dimensional space taken up by the object. It is measured in square units.

Area of the rectangle =  length × width 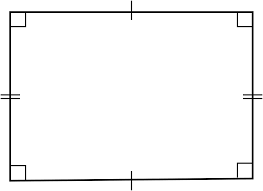 Comparing Perimeters of Rectangles and Squares from Their Shapes

Therefore the Perimeter of the square is greater than that of the rectangle.

Question 1: The total boundary length of a closed figure is called

Answer : C is the correct option. The total boundary length of a closed figure is called the perimeter.

Answer : B is the correct option. The area is 2- Dimensional. Because it has length and width.

Question 3: What is a plane figure?

Question 4: What are geometric figures?

Answer: These are the figures that we see in math, and they have a different name. Such as circle, trapezium, triangle, square, rectangle, heart, diamond, etc. are some of the geometric shapes. However, some of the shapes such as polygons have been described based on their number of sides.

Question 5: Are cones and cylinders a plane figure?

Answer: Basic shapes refer to all those plane figures that we can draw on a piece of paper. Besides, the 15 basic shapes are rectangle, square, circle, triangle, heptagon, hexagon, pentagon, octagon, nonagon, decagon, parallelogram, kite, trapezium, rhombus, and quadrilateral.