One of the most powerful tools in any engineer or scientist’s toolkit is 3D geometry. 3D geometry comes to picture into model real-world quantities such as velocity, fluid flows, electrical signals, and many other physical quantities. In this article, we will first attempt at understanding a 3D system.  Later we will move on to a basic understanding of how to perform various mathematical operations is a 3D space.

We can understand any 3D space in terms of 3 coordinates- x, y, and z. 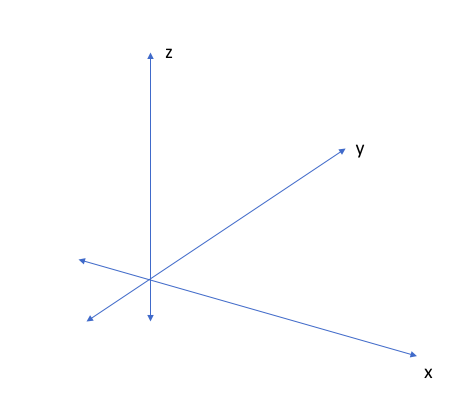 Vectors are the Fundamental Unit of 3D Operations. In physics, Vectors are quantities having both magnitude and distance. In mathematics, especially in 3D geometry, a vector is a directed entity that connects 2 or more points. A position vector is a special type of vector that connects the origin O(0,0,0) to the point, as shown below: 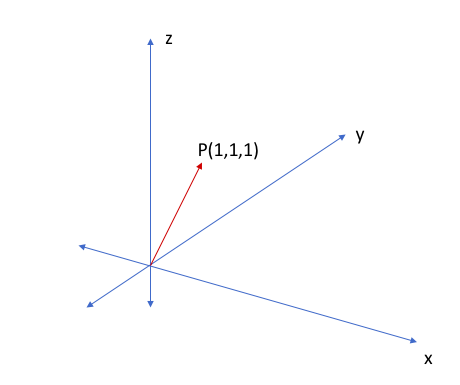 Magnitude of a Vector

Solution: In the given example, we have:

Solution: In the given example, we have:

A unit vector is any vector that has a magnitude of 1.

Components of a Vector

If we consider a Cartesian coordinate system, any vector can be defined in terms of 3 components. We can define the notation of any vector as:

Question 2: What are three-dimensional shapes?

Answer: Three-dimensional (3D) shapes refer o all those shapes that are composed of a 3D geometric shape. Furthermore, these shapes occupy space and have a volume (means they can be filled with liquid). Some common examples of 3D shapes are prism, sphere, cone, cylinder, cube, rectangle, etc.

Question 3: What are the first three dimensions?

Answer: These are space dimensions such as x-y-z, hence they are width, length, and height. The zero dimensions are that dimension in which there is the only point, the first dimension has only length, the second dimension has length and breadth and so on.

Question 4: What is a 3D coordinate system?

Answer: It refers to a Cartesian coordinate system, which is formed by a point called the origin. Moreover, it basically consists of three mutually perpendicular vectors. And these vectors define the three coordinate axes: the x-, y- and z-axis. Besides, we also know them as the abscissa, ordinate and applicate axis, respectively.

Question 5: Is time the 4th dimension?

Answer: Yes, we regard time as the fourth dimension, although in a distinctive sense than only going from 2D to3D. We lookto time as the 4th dimension because of relativity, as we have to incorporate the time synchronize in defining events fully in space along with the time called the space-time coordinate.