The six trigonometric ratios of a right angle triangle are Sin, Cos, Tan, Cosec, Sec and Cot. They stand for Sine, Cosine, Tangent, Cosecant, Secant, and Cotangent respectively. In the following section, we will learn the formulas for these trigonometric ratios. We will also learn some funny mnemonics to memorize it.

Consider a right-angle triangle ABC, right-angled at C. In that case, side AB will be the hypotenuse. Also, if we chose AC as the base and BC as the perpendicular. Then, for ∠BAC, value of sinθ = Perpendicular/ hypotenuse = BC/AB

Fixing the base and perpendicular can be difficult sometimes. For example in the triangle above,

Confusing, isn’t? To remove this confusion, we will name different sides of the right-angled triangle as adjacent, opposite and hypotenuse.

Now, formulas for ratios are as follows:

The reciprocal of sin, cos, and tan can also have names. Also, it’s obvious that they are trigonometric ratios. They are as follows:

What are the Properties of Inverse Trigonometric Functions? 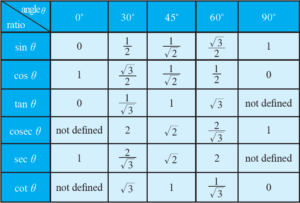 A common use of mnemonics is to remember facts and relationships in trigonometry. For example, representing the sine, cosine, and tangent (and their corresponding sides) as strings of letters can help us remember them. Consider one famous mnemonic Some People Have, Curly Black Hair Through Proper Brushing.

Here, Some People Have is for

Curly Black Hair is for

Through Proper Brushing is for

Question 1: Consider a right angle triangle ABC right angled at C. If the hypotenuse=AB = 5cm, perpendicular=BC =4cm and base=AC= 3cm. Then, for ∠BAC=θ, calculate the value of sinθ, cosθ and tanθ.

Question 2: What are the 3 trigonometric ratios?

Answer: The 3 trigonometric ratios are sine, cosine and tangent. We can find out the sine (or cosine or tangent) of either of the known- 90° angles.

Question 3: What is the use of trigonometric ratios in right angle triangle?

Answer: Trigonometric ratios apply to a right angle triangle only. It is a special triangle in which one angle is 90° and the other two are less than 90°. Also, each side of the triangle has a name. They are hypotenuse, perpendicular and base.

Question 4: What is the tangent ratio?

Question 5: What is a hypotenuse?