We all associate the process of digestion with the stomach, right? But what if I told you, the digestive process starts from the mouth itself. There are various other organs involved in the digestion process occurring in the human body. Let us educate ourselves about this process.

The digestion process is a series of reactions of food with the digestive hormones and juices. This starts right from the oral cavity.

Why is digestion important?

Many digestive enzymes and hormones act on food, at various stages during the process of digestion. The whole process occurs in a sequential manner. 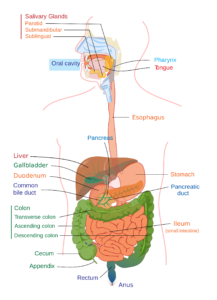 The following table shows the digestive process in a simple format.

The digestion process can be divided into different stages, such as digestion in the:

Digestion includes a complex combination of mechanical and chemical processes. Some of the activities in the process include ingestion and propulsion of food, mechanical or physical digestion, chemical digestion, absorption, and defecation. 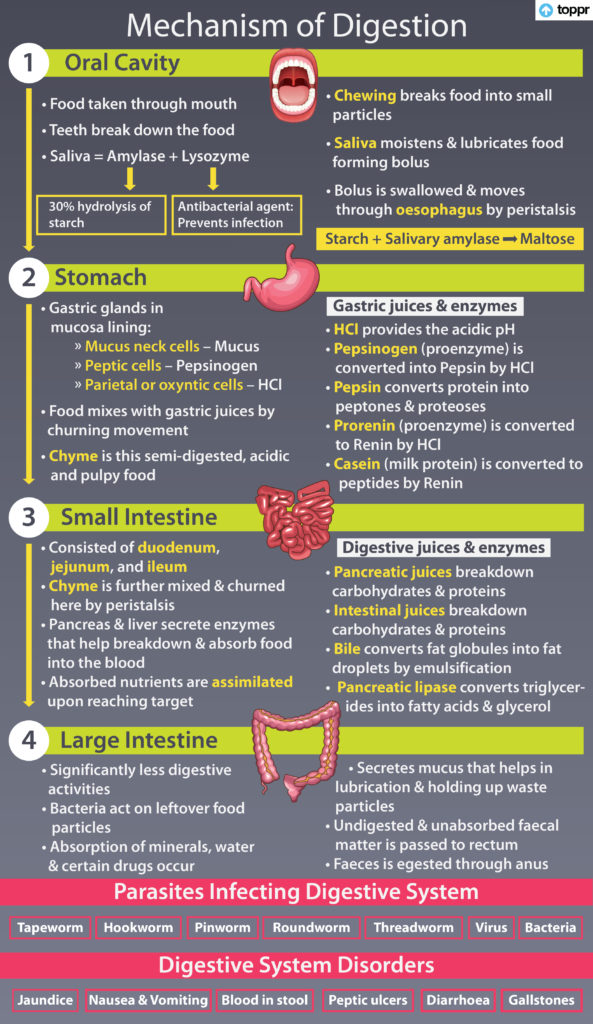 Digestion in the Oral Cavity

When food is taken in through the mouth, chewing and mixing of the food occurs. There is also a chemical breakdown of carbohydrates, due to the action of saliva from the salivary glands. 30% of the starch is hydrolyzed by the action of amylase, which is a salivary enzyme. The other enzyme, lysozyme is an antibacterial agent that prevents infections.

Mastication of food and swallowing of food are the important activities that take place here in the oral cavity. Food is broken down into smaller particles by the chewing action of teeth. As saliva is added, it mixes with the food particles, slowly moistening and lubricating the food. This small ball is called a bolus, which is then swallowed. The pharynx helps in the movement of the bolus into the oesophagus, from where it moves to the stomach through the peristaltic movements of the oesophagus.

Learn more about the Human Digestive System here in detail.

Digestion in the Stomach

When food reaches the stomach, it stays for approximately 4 to 5 hours. There are various gastric glands in the mucosa lining of the stomach. The mucus neck cells secrete mucus. The Peptic Cells secrete the proenzyme pepsinogen. The Parietal or Oxyntic Cells secrete HCl (Hydrochloric acid) and intrinsic factor that is essential for vitamin B12 absorption.

Food in the stomach gets mixed thoroughly with the gastric juices through the churning movements of the stomach muscle. This mass of food that is semi-digested, acidic and pulpy is called the chyme. It is mostly the proteins that get digested in the stomach. The mucus and the bicarbonates of the gastric juice help in protecting the mucosal epithelium from the highly acidic HCl. Mucus also helps in lubricating the food.

The different chemical reactions that take place in the stomach are summarised as follows.

After the action of the gastric juices and enzymes, food then enters the small intestine. Digestion in the Small Intestine

In the small intestine, further digestion takes place. Due to the various movements of this organ, the chyme is further mixed and churned. There are many enzymes that are secreted into the small intestine from organs such as pancreas, liver; apart from the intestinal juices. All these react with the food particles and digest them into smaller particles that can be absorbed into the bloodstream.

Learn more about Disorders of Digestive System here in detail.

The different chemical reactions that occur are summarised below:

The biomacromolecules are broken down in the duodenum region. All the simpler forms of the digested food are absorbed in the jejunum and ileum regions. Any leftover undigested, unabsorbed food particles are then passed on to the large intestine.

What is Absorption and Assimilation?

Digestion in the Large Intestine

Any undigested and unabsorbed waste particles called as the faecal matter, are then passed to the rectum, from where it is eliminated through the anus. 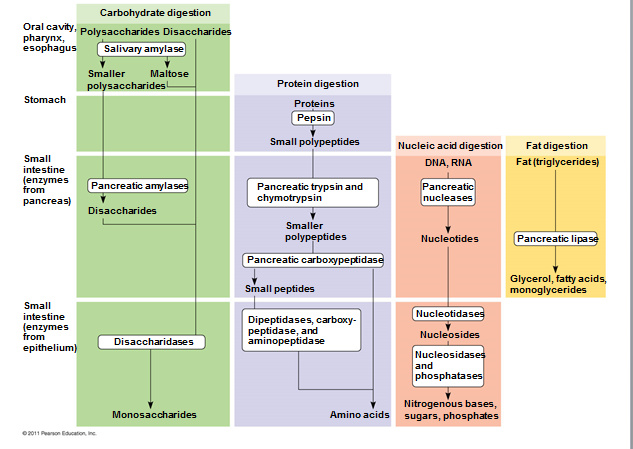 Control of the Digestive Processes

Q: Why is bile important?

Ans: Bile is secreted by the liver. It plays an important role in the emulsification of fats. Bile juice also helps in the absorption of fats. The bile salts reduce the surface tension of the large fat droplets and make them into smaller droplets. Lipase acts on these smaller fat droplets. Lipase is activated by bile. Bile is important due to its significant role in the digestion process.

Q: If HCl is not secreted in the stomach, what would happen?

Ans: HCl activates pepsinogen which is then converted into pepsin. This acts on proteins. In the absence of HCl, protein digestion does not take place. HCl also helps in killing the bacteria in the stomach.