Drawing number into triangular dot pattern and making a square (with same numbers of dots in rows and columns) will give a square number. 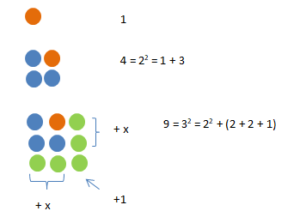 A number will be a square number if it is the sum of consecutive or successive odd numbers starting from 1. Let us now consider,

This means that 16 is a perfect square. Any non-perfect square will leave a remainder other than zero. Try out the successive subtraction by consecutive odd numbers for 35.

Product of Two Consecutive Even Or Odd Natural Numbers

Problem: Check if 121 is a perfect square by the method of the sum of successive odd numbers from the math patterns.

Solution: Subtracting the number by a series of successive odd numbers will give

So as we are getting zero in the end hence 121 is a perfect square.

Problem: Express 3721 as the sum of consecutive natural numbers.

Solution: The correct option is B. For example,

Therefore D is the correct option for the problem.

Question 1: Why do we study patterns in mathematics?

Answer: The skill to identify and form patterns assists us in making predictions on the basis of our observations. Understanding patterns help prepare kids for learning complex number concepts and mathematical operations. Moreover, patterns permit us to see relationships and form generalizations.

Question 2: What are the types of patterns in math?

Answer: A pattern refers to a series or sequence which repeats. There are two major kinds of math patterns. They are number patterns or sequences of numbers. These are arranged as per a rule or rules. Then, we have shape patterns that are tagged by making use of letters and the way that they repeat.

Question 3: What is the difference between Square Numbers?

Question 4: What is a visual pattern?

Answer: A visual pattern refers to a sequence of pictures or geometric objects which have been formed on the basis of some rule. The sequence of pictures that keep repeating is referred to as the pattern unit. Some visual patterns are on the basis of a picture or geometric object which keeps increasing or decreasing in size in a particular manner.