Perfect Square Series is a series of numbers that are the perfect squares of some other number. This series of numbers from which we get the Perfect square series is the parent sequence to the series. Sometimes the rule with which we assemble a sequence together is in the parent series and sometimes it is in the square series itself.  Let us begin our understanding of the Perfect Square Series and the concepts that are most expected in the IBPS PO, SO, SBI Cleric and other similar exams.

Let us define the perfect square first. A number is a perfect square if we get it by taking the square of an integer number. In other words, we can say that if we square an Integer, the resulting number will always be a perfect square. By Integers, we mean all the whole numbers and their negative numbers. 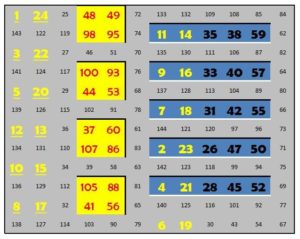 This table will save you a lot of time and make your square series questions a fun experience rather than a tedious task. In the exams, you will see a lot of the questions that you encounter will have numbers from this table. Even if the numbers are not from this table, we can use it to deduce the squares. For example, 810000 = (900)2 = (30)4. So not only will this table help you with squares, it will also help you with simplifying many of the large numbers that you may encounter. Treat it as the vocabulary of mathematical numbers. Let us solve some examples.

As is the case with other number series, we will have a few types of questions here. A series may be a plain square series that has a missing number or asks you to pick out the wrong term. It may be a wrong series from a set of number series. Let us see with the help of some examples.

Example 1: In the following options, a few number series are present. One of them has an error, pick the wrong one out:

Answer: Try solving this without looking at the table present above. It takes a lot of time. The first series is just an A.P. with a common difference of 6. Now using the table, we can see that the second sequence is the perfect square sequence. This series can be formed from the series given in option A. The third sequence is a two-tier square series but in place of 841, we must have 900. This is a wrong series. The last series is also a square series. So the correct option or the wrong series of the four options presented above is C) 441, 529, 676, 841.

Answer: The first term is 8, which is not a square. Although 8 is a perfect cube, the other terms are not.  Hence we conclude that this series is neither a perfect square nor a perfect cube series. That means it may be a tier-two series. First, we check the difference between the two beginning terms that is 8 and 12 = 4 or 22. Next the difference between 21 and 12 = 9 = 32. So there is some sort of a pattern. If we could see the same pattern in the next term, we will generalise this rule as the rule of the series.

Q 1: In the following sequences, one of the sequences has an incorrect entry. Find that series from the options present below: