In wave mechanics, any given wave contains parameters such as frequency, time period, wavelength, amplitude, etc. The angular frequency is an important computation for an object having periodic motion. For example such as a ball at the end of a rope being swung around in a circle, then the rate at which the ball sweeps through a complete 360°. In this article, we will discuss the angular frequency formula with examples. Let us learn the interesting concept!

What is the angular frequency?

To understand this quantity, we need to understand a natural quantity as a time period. The time period of an oscillating object is the amount of time it takes to complete one oscillation. For example, the period for the motion of the Earth around the Sun is 365 days. 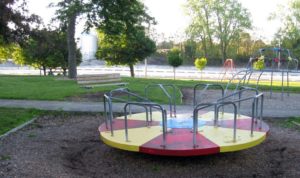 To know about the rate at which the rotations are occurring, we need to find the angular frequency. The frequency of rotation i.e. how many rotations take place in a certain amount of time can be computed as:

In the case of the Earth, one rotation takes 365 days, thus

Also in terms of the time period, we compute angular frequency as:

For example, the angular frequency for the above case will be

Its SI unit is rad/sec.

Q.1: Calculate the angular frequency of an oscillating object with a time period of 30 seconds.