We come across various kinds of motions in our daily life. You have already studied some of them like linear and projectile motion. However, these motions are non-repetitive. Here, we are going to learn about periodic and oscillatory motion. Let’s find out what they are.

Circular motion is an example of periodic motion. Very often the equilibrium position of the object is in the path itself. When the object is at this point, no external force is acting on it. Therefore, if it is left at rest, it remains at rest.

Period and Frequency of Periodic Motion

The reciprocal of T gives the number of repetitions per unit time. This quantity is the frequency of periodic motion. The symbol υ represents frequency. Therefore, the relation between υ and T is

Thus, the unit of υ is s-1 or hertz(after the scientist Heinrich Rudolf Hertz). Its abbreviation is Hz. Thus, 1 hertz = 1 Hz = 1 oscillation per second = 1 s-1 The frequency of periodic motion may not be an integer. But it can be a fraction. 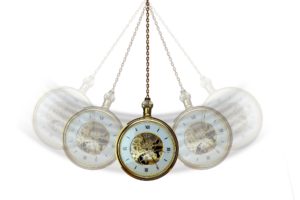 Oscillatory motion is the repeated to and fro movement of a system from its equilibrium position. Every system at rest is in its equilibrium position. At this point, no external force is acting on it. Therefore, the net force acting on the system is zero. Now, if this system is displaced a little from its fixed point, a force acts on the system which tries to bring back the system to its fixed point. This force is the restoring force and it gives rise to oscillations or vibrations.

Moreover, there is no significant difference between oscillations and vibrations. In general, when the frequency is low, we call it oscillatory motion and when the frequency is high, we call it vibrations. Furthermore, simple harmonic motion is the simplest type of oscillatory motion. This motion takes place when the restoring force acting on the system is directly proportional to its displacement from its equilibrium position.

Consider a block attached to a spring, which in turn is fixed to a rigid wall. We measure the displacement of the block from its equilibrium position. In an oscillatory motion, we can represent the displacement by a mathematical function of time. One of the simplest periodic functions is given by,

If the argument, ωt, is increased by an integral multiple of 2π radians, the value of the function remains the same. Therefore, it is periodic in nature and its period T is given by,

Taking A = Dcos∅ and B = Dsin∅ equation V becomes, f(t) = Dsin(ωt + ∅). In this equation D and ∅ are constant and they are given by,

Therefore, we can express any periodic function as a superposition of sine and cosine functions of different time periods with suitable coefficients. The period of the function is 2π/ω.

Difference Between Periodic and Oscillatory Motion

Q: In periodic motion, the displacement is