In our daily life, we have seen cone in many different sizes and color. Moreover, it is a geometrical shape that has many uses. Furthermore, the most common example of the cone is an ice cream cone. Besides, in this topic, we will discuss cone, cone formula, its derivation, and solved example. 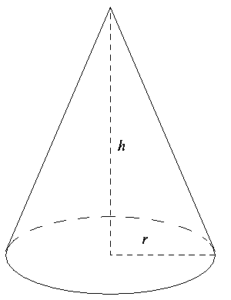 Cone is a 3D (3 dimensional) geometric shape. Furthermore, it has a pointy end on one side and a flat surface on the other side. Also, there are two types of cones, namely right circular cone and oblique cone

The right circular cone is a cone that has a line that touches the top point of the cone in a perpendicular. Moreover, this passes through the center of the circle. Furthermore, the apex (top point) of the cone lies just above the center of a circular base. Besides, it is the most common type of geometric cone. For example, ice cream, traffic cones, etc.

The cone has two formula one for its surface area and one for its volume (because it is a 3D shape). Now, let’s discuss the formula

The surface area of the cone

The volume of the Cone

The cone has a volume which means it is a 3D shape. Also, the curved surface of the cone joins the apex and base of the cone. Moreover, having volume means that it occupies space. Furthermore, we measure it in a cubic meter.

Besides, finding the volume be sure that all the units are in the same unit.

Find the surface area of the cone whose radius is 4 cm and slant height is 8 cm?

Find the volume of the cone whose radius is 8 cm and height is 18 cm?