Gravity is the force that attracts two bodies towards each other. This is the force that causes apples to fall towards the ground on the hand due to these planets are orbiting the sun. The object with more mass will have a stronger gravitational pull. It is one of the four fundamental forces available in nature. Although nobody has discovered gravity exactly, the legend and famous astronomer Galileo Galilei did some of the earliest experiments with it. As he dropped the balls off the Tower of Pisa to see how fast they fell. This article will explain the concept of interesting gravity and gravity formula physics with examples. Let us learn it!

Table of content
1 What is Gravity?
2 The Formula for Gravity
3 Solved Examples for Gravity Formula Physics

Gravity is also popular as gravitation. It is the force that occurs among all material objects in the universe. For any two objects with some mass, the force of gravity has a tendency to attract them towards each other. This fact is according to the Universal Law of Gravitation. It is what causes the objects to have weight on the earth. When we weigh ourselves, the scale tells us how much gravity is acting on our bodies.

Historically, philosophers such as Aristotle thought that heavier objects always accelerate towards the ground with ore faster speed. But later experiments disproved it. Because acceleration due to gravity is always a constant and is not depending on the mass of the falling object. 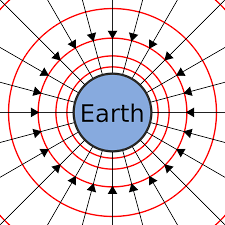 The Formula for Gravity

Isaac Newton gave his Theory of Universal Gravitation in the 1680s. He found that gravity acts on all kinds of objects and it is a function of both mass and distance. Every object attracts the other one with a force which is proportional to the product of their masses. And also it is inversely proportional to the square of the distance between them. The equation is represented as:

Q.1: What will be the gravitational force acting upon two objects of the masses 15 g and 15 kg. These are kept at 11 m distance. Use Gravity Formula Physics

Substituting the values, We have