In physics many laws observe the inverse square rule, one such law is the one governing intensity. Let us learn more about Inverse Square Law Formula in detail.

What is the Inverse Square Law Formula?

The intensity of the light to an observer from a source is inversely proportional to the square of the distance from the observer to the source. This shows that as the distance from a light source increases, the intensity of light is equal to a value multiplied by 1/d2. Thus closer a light source brighter it is. This is very evident from the fact that in the night when a car approaches us from a distance it looks dark but as it comes near the light the headlights make it be brighter as the distance between the observer and the car has decreased. 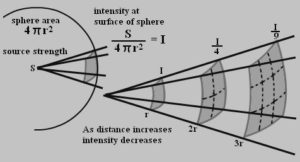 Similar concepts are also used in the gravitational law and the electric charge law of the Coulomb’s law. The formula for this is shown below. The inverse square law of intensity is applicable to not only the visible rays in the electromagnetic spectrum but also to all the other spectrums like the gamma rays, X rays, UV rays etc.. The intensity of visible light is measured in candela units, while the intensity of other waves is measured in Watts per meter squared (W/m2).

Where the distance is d(metres), the intensity of the radiation is I(candela).

If the distances are d1 and d2 and the intensities are I1 and I2 respectively. Then Inverse-square law is  as follows,

Inverse square law formula is used in finding distance or intensity of any given radiation. The intensity is calculated in Lumen or candela and distance is given in meters. It has widespread applications in problems grounded on the light.

Answer: The intensity at the farther distance can be found using the inverse square formula as follows,

Answer: The intensity at the near distance can be found using the inverse square formula as follows,

and substituting  the values that are known into the equation:

The intensity of the radio signal from the transmitter is 1.92 W/m2.

Calculations which use inverse square law tend to be simple and hence they are used as a part of much larger calculations.