What is Orbital Velocity?

Orbital Velocity is the velocity at which a body revolves around another body. It is an important concept in the field of astronomy and physics. It is used extensively to launch satellites into orbits and to make sure that they stay in their orbits. Inertia of the moving body tends to make it move on in a straight line, while gravitational force tends to pull it down. Thus the path traced will be a balance between these two forces i.e. an elliptical path is formed.

A cannon fired from a mountaintop will throw a projectile farther if its muzzle velocity is increased. The surface of the Earth may be thought of as curving away from the projectile, or satellite, as fast as the latter falls toward it. The orbital velocity is directly proportional to the mass of the body for which it is being calculated and inversely proportional to the radius of the body.

Earth’s orbital velocity near its surface is around eight kilometres (five miles) per second if the air resistance is disregarded. The farther from the centre of attraction a satellite is, the weaker the gravitational force and the less velocity it needs to remain in orbit.

The concept of orbital velocity is very important in space exploration. It is used extensively by space agencies to understand how to launch satellites. It helps the scientists to discover the speeds at which the satellites must revolve around a planet or a heavenly body so that it doesn’t collapse into it.

Orbital velocity combined with the escape velocity are the two most important calculated values needed to plan a space mission or a satellite mission. Problems involving these two entities are also extensively asked in competitive exams. Thus it is important to know about these formulas and also the logic behind these formulas so that the problems can be solved easily.

Let us learn more about its formula here.

For any revolving object, the formula for the orbital velocity is given by,

It’s derivation is explained in the figure below, 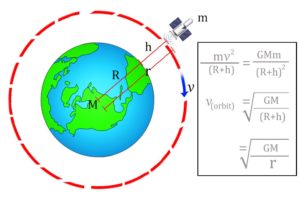 Q: A satellite launch is made for the study of Jupiter.Determine its velocity around Jupiter.

Solution: Substituting the  parameters in the orbital velocity formula, we get

Solution: Given as follows,

The Orbital velocity formula is given by