The measure of hotness or coldness of an object is relative to another object is called temperature. Kelvin and Celsius’s scales are the most frequently used temperature – assessing scales in thermometer for measuring temperature. The interval of 1 degree on the Kelvin scale is similar to the interval of 1 degree on the Celsius scale. In other words, a change of 1 Kelvin is equal to a change of 1 Celsius degree. The Celsius temperature scale is a common System International (SI) temperature scale and the official scale is Kelvin. Let us now study in detail about Kelvin to Celsius formula. 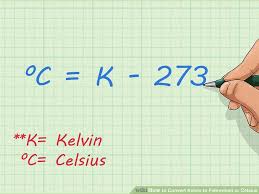 The Swedish astronomer Anders Celsius developed the Celsius scale in 1742. The concept of the Celsius scale is based on the melting and boiling points of water under normal atmospheric conditions. The current scale is an inverted form of the original scale, which was divided into 100 divisions.

Q1. Water freezes at 0° C. What is the temperature in Kelvin?

Q2. Temperatures on Enceladus one of the moon’s of Saturn, have been measured to be between 85-90 Kelvin, in a ‘warm’ region near the South Pole. What is the temperature in degrees Celsius?

The melting point of hydrogen is 14.01 K