Why do you feel warmer when you rub your palms together in winter? This happens because rubbing our palms produces heat. Also in steam engines, we use the heat of the steam for moving the pistons, due to which the wheels of the train rotate. But what’s the actual process behind this? Well, this happens due to ‘thermodynamics’. Let us study more about it below.

Let us break the word thermodynamics into two words, thermo and dynamics. ‘Thermo’ stands for heat while ‘dynamics’ is used in connection with a mechanical motion which involves ‘work’. Therefore, Thermodynamics is the branch of physics that deals with the relationship between heat and other forms of energy.

Now which quantities determine the state of the system? They are pressure, volume, temperature, mass or composition, internal energy etc. These quantities are referred to as the state variables and measured only when the system is at equilibrium. The systems that we study in thermodynamics consist of very large numbers of atoms or molecules interacting in complicated ways. But, if these systems meet the right equilibrium, they can be described with a very small number of measurements or numbers.

In thermodynamics, the system is defined as a definite space or area on which the study of energy transfer and energy conversions is made.

The system and surroundings are separated by a boundary. It may be fixed or movable or imaginary. It will not occupy any volume or mass in space.

Anything outside the system which affects the behavior of the system is known as surroundings. 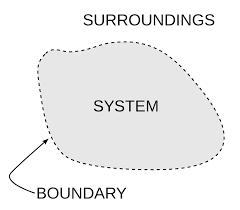 Heat is energy transferred between substances or systems due to a temperature difference between them. As a form of energy, heat is conserved that means it cannot be created or destroyed. It can however, be transferred from one place to another. Heat can also be converted to and from other forms of energy.

For example, a steam turbine can convert heat to kinetic energy to run a generator that converts kinetic energy into electrical energy. A light bulb can convert this electrical energy to electromagnetic radiation which, when absorbed by a surface, is converted back into heat. By convention, heat is given to a body is taken as positive while that taken out of the body is taken as negative.

In a process, the work done by the system or on the system depends not only on the initial and final states of the system but also upon the path adopted for the process. Work is done when a force acting on a system displaces the body in its own direction.Work ‘W’ done on or by a system is the product of force and displacement.

For example, a man pushing a car may feel that he is doing a lot of work, but no work is actually done unless the car moves. The work done is the product of the force applied by the man multiplied by the distance through which the car moves. If there is no friction and the surface is level, then the car, once set in motion, will continue rolling indefinitely with constant speed. The rolling car has a kinetic energy of motion equal to the work required to achieve that state of motion.

The internal energy of a system depends upon the state of the system. It has a definite value for a definite thermodynamic state. It is not a measurable quantity. If a system starting from one state passes through different states and finally returns to its initial state, then the change in its internal energy will be zero.

Solved question For You

Q. The temperature at the bottom of a high waterfall is higher than that at the top because