Rotational kinetic energy is the energy absorbed by the object by the virtue of its rotation. The equations for linear and rotational kinetic energy can be expressed in the same way as to the work-energy principle. Imagine the following parallel between a constant torque exerted on a flywheel with a moment of inertia I and a constant force exerted on a mass m, both beginning from rest. 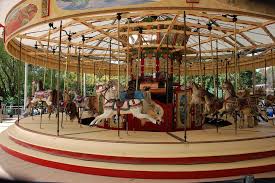 For the linear case, beginning from rest, the acceleration from Newton’s second law is equivalent to the final velocity divided by the time and the average velocity is half the final velocity, presenting that the work done on the block gives it kinetic energy equal to the work done. In the case of rotational motion, also beginning from rest, the rotational work will be:

The Formula for Rotational Kinetic Energy

We can compute it with the following Rotational Kinetic Energy Formula:

Solution: Known parameters are as follows,

Q.2: Determine the rotational kinetic energy of electric motor if angular velocity is \(100 \pi\) rad per sec and the moment of inertia is \(50 kg m^2\)