Velocity measurement is a very important computation used in mechanical physics. It is the vector measurement of the rate and direction of the motion. In simple words, velocity is the speed at which something moves in a particular direction. For example as the speed of a car travelling north on a highway, or the speed a rocket travels after launching. The scalar means the absolute value magnitude of the velocity vector is always be the speed of the motion. In this article, the student will learn the Velocity formula physics with suitable examples. Let us learn the concept!

Velocity is the measurement of how quickly an object can move. Therefore, the velocity is the change in the position of an object and then divided by the time. Velocity will have the magnitude as well as a specific direction. The general way to calculate the constant velocity of some object moving in a straight line is to divide the distance by time taken. 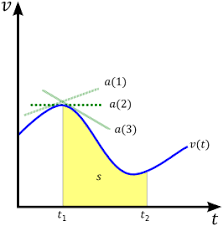 In simple way, it is

In other way the Velocity Formula Physics is,

In the calculus terms, it is the first derivative of the position taken with respect to time. We can compute the velocity by using a simple formula that uses distance, and time.

The SI units for velocity is meters per second. But, velocity may also be expressed in any other unit of distance per time unit.

Velocity measures motion starting from one place and heading towards another place. In other words, we use measures of velocity to determine how quickly you (or anything in motion) will arrive at a destination from a given location. For example, if a train leaves Penn Station in New York at 2 p.m., then we may know the velocity at which the train is moving north. Also, we may predict when it will arrive at some Station.

Q.1: A boat is in a 1000 m race, and it crosses the starting line at its full speed. Then it reaches the finish line within exactly 1 minute and 20 seconds. Determine the velocity of the boat in meter per second.

Solution: The initial position will be the starting line, which we can get the value,

The velocity can be found using the formula as:

Q.2: A submarine descends 150 meters in 5 seconds. Find out the Velocity of the submarine.