This article deals with the strain formula and its derivation. When a particular force acts on an object, individuals usually concern themselves about how the object would move afterward. However, what such individuals fail to consider is how the force might affect the structure of the object. A good example can be bridges. When vehicles move on a bridge, they tend to create a downward force due to their weight. The bridge undergoes stress test to withstand without breaking under heavy pressure. Stress certainly refers to the internal force per unit area. Most noteworthy, the amount of strain applied to an object ultimately determines the level of strain determined by it. 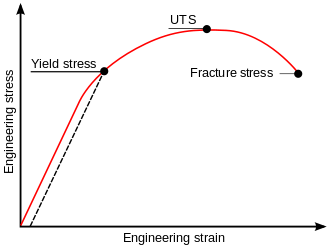 Strain happens to be a unitless quantity. This is because, the value in the numerator and denominator always have the same units. Furthermore, strain refers to a description of deformation in terms of the relative displacement of particles in a particular body.

However, this description excludes the rigid body motions. There certainly is a possibility to make different equivalent choices for the expression of a strain field. Moreover, this depends on whether it is defined with respect to final or initial configuration of the body.

Therefore, one can derive the following formula of strain from the above formula or equation:

Finally, the formula of strain is = \(\frac{change in dimension}{original value of dimension}\)

Q1 Heating results in the expansion of metals. A hot liquid enters through a copper pipe 10.00 m long. This causes an increase in length to 10.17 m. Calculate the longitudinal strain?

Hence, the longitudinal strain is 0.01.