What is Resistance or Resistivity?

The tendency of a material/device towards resistance is the resistivity of the device/circuit. The SI unit of resistivity is ohm-meter. The unit length across the cross-sectional area of the device is also resistivity. Therefore, the nature and temperature of the material also define resistivity (σ). 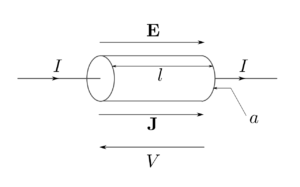 The graph of resistivity as follows. The graphs depict current (I) to voltage (V) ratio, whereas, dotted line A, B, C shows the idealized graph. After a certain amount of current, the device starts resisting to the current flowing in the system and the resistivity becomes constant. 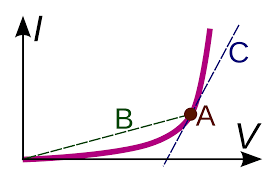 The free electrons in a conductor have random velocities and move in random directions. When current is applied across the conductor the randomly moving electrons are subjected to electrical forces along the direction of the electric field.

Due to this electric field, free electrons still have their random moving nature, but they will move through the conductor with a certain along with force. The net velocity in a conductor due to the moving of electrons is referred to as the drift of electrons.

For example, let’s say you are crossing a river and moving from one bank to another bank along with the river flow, then you are the electron which is randomly moving and river water acts as the drift force. Then the force applied to the randomly moving electron will result in the change of course of the path of an electron.

Examples for You on What is Resistance!

Question 1: When a potential difference V is applied across a conductor at a temperature T, the drift velocity of electrons is proportional to

Question 2: A steady current flows in a metallic conductor of non-uniform cross-section. Which of the following quantities is constant along the conductor?

Solution: Current. When a steady current flows through a metallic conductor of non-uniform cross-section, then drift velocity
Vd=I/(Ane) or Vd∞(1/A). E∞(1/A). Both Vd and E change with A, only current I remain constant.

Question 3: Relation between drift velocity (vd) of electron and thermal velocity (vt) of an electron at room temp is expressed as

Solution: vd<vt. Electrons with the Fermi energy carry considerable kinetic energy. Their mean thermal velocity at temperature T should be vt= √3kTm, which generally turns out to be quite large. The average velocity with which electrons must pass along a conductor to carry a current is called drift velocity is given by vd=I/(Ane) which is much less than the thermal velocity. Hence vd<vt.