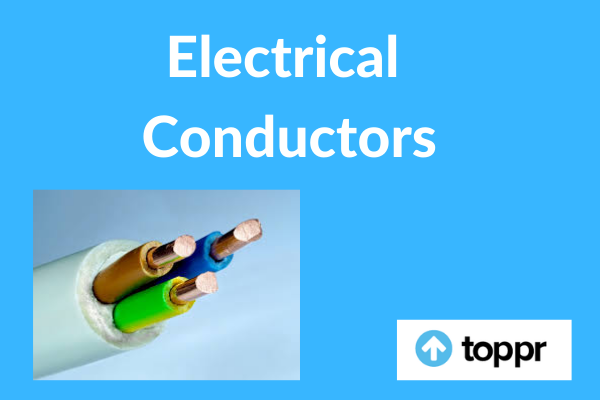 The electrical conductivity of the material is managed by the electrons which are lightly attached to the atom and are easily available to be separated from it. When the electric current flows through the material, electrons carry the electric current from one end to another but they do not move from their places. When electricity passes, they get charged and vibrate at their places. This vibration transfers the charge from them to nearby electrons and nearby electrons then start vibrating and transfer the charge to neighbouring electrons. This way, electricity transfers from one place to another. When the electricity is not passing through the conductor, the electrons do not have any charge difference and therefore they do not vibrate and do not disturb neighbouring electrons.

When the electrical conductor is connected across the battery terminals, due to the potential differences, the vibrations start in electrons and they start to flow from negative terminal to positive terminal.

In the equilibrium condition, electrical conductors exhibit the following properties,

On the other hand, the difference in temperature affects its performance. At extremely low temperatures, the resistance offered by conductors to electricity becomes minimal as compared to the room temperature resistance. This phenomenon is known as superconductivity and the metals which exhibit this property and termed as superconductors.

Size or thickness and length of the conductor also affect the performance. Thinner wire shows more resistance as compared to the thick wire. So it can be said that the resistance of a wire is inversely proportional to the cross-sectional area.

The length of the wire also affects the flow of electrical current. The resistance offered by a wire is directly proportional to the length of it. Longer the wire higher will be the resistance.

Types of the Electrical Conductors

Some metals like copper, iron, silver, aluminium and gold are good conductors of electricity and are used widely. Though gold and silver metals are very good conductors bur are costlier than copper and aluminium. Hence, they are used in very sophisticated instruments like computers, mobiles and other instruments where a precise amount of electricity is required. Copper is abundantly available and is widely used in home appliances and circuits. Though aluminium has slightly less conductivity than the copper metal it is very cheap therefore it is used in transmission lines.

Insulators are the materials which do not allow the electric current to flow through them. In these materials, electrons are bonded tightly with their atoms and do not get separated even after the application of the strong potential difference. Some common examples are wood, plastic, glass, rubber, etc. and they are used to cover the wire through which the electric current is passing. House-hold electric circuits and devices are covered by the insulators to avoid energy loss and safety. Covering the copper wires by these insulators makes the electricity more efficient by concentrating the flow.

Q.1: What is an electrical conductor?

Q.2: Write down the types of electrical conductors?

Answer: There are four types of electrical conductors. They are

Q.4: Does the length of the conductor affect the flow of current?