An important part of electric circuits is Resistors. When a resistor connects to a combination of series and parallel connection it forms more complex circuit networks. Regulation of the current level of a device is a resistor’s functionality. To know more about resistors in series or parallel, let’s explore the article further!

Resistors are two-terminal devices. Therefore, voltage division, regulation of current in the device and adjusting signal level are the functionality of a resistor. Representation of a resistor is done through Ohm’s Law.

Many types of resistors are available and some are the following:

In this kind of connection, resistors are in a sequential array of resistors to form an electronic circuit/ device. Resistors are connected is in a single line and hence common current flows in the circuit.

The connection is in such a manner that the current flowing through the 1st register has to then flow further through the 2nd register and then through 3rd. Therefore, a common current is flowing in connection with a resistor in series. At all point in the circuit, the current amoung the resistors is same. For example,

All the resistors in series that is R1, R2, R3 have current I1, I2, I3 respectively and the current of the circuit is It.

Therefore, the total resistance can be calculated as

furthermore, the total resistance of the above resistors in series is given by

The Equation of Resistors in Series

Since the connection of resistor is in a series fashion that is in the sequential array or continuously one after other. The total resistance is equal to the resistance value of each resistor in the device/ circuit. 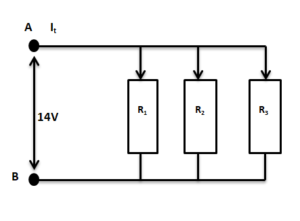 Q1: When three identical resistances are connected to form a triangle the resultant resistance between any two corners is 30Ω .The value of each resistance is:

Q2. Identify the changes in a circuit on adding a light bulb in parallel to the actual resistance of the circuit. It will:

Q3.The least resistance that one can have from six resistors of each 0.1 ohm resistance is: