You might have noticed in science fiction movies that the water which surrounds the nuclear reactions is glowing bright blue. Even wondered why that happens? Why is it not in any other colour like yellow, red or anything else? Even though the movies make use of special effects, the glow is because of a scientific reason. It is because the phenomenon is called Cherenkov radiation which we will study in detail in this article. 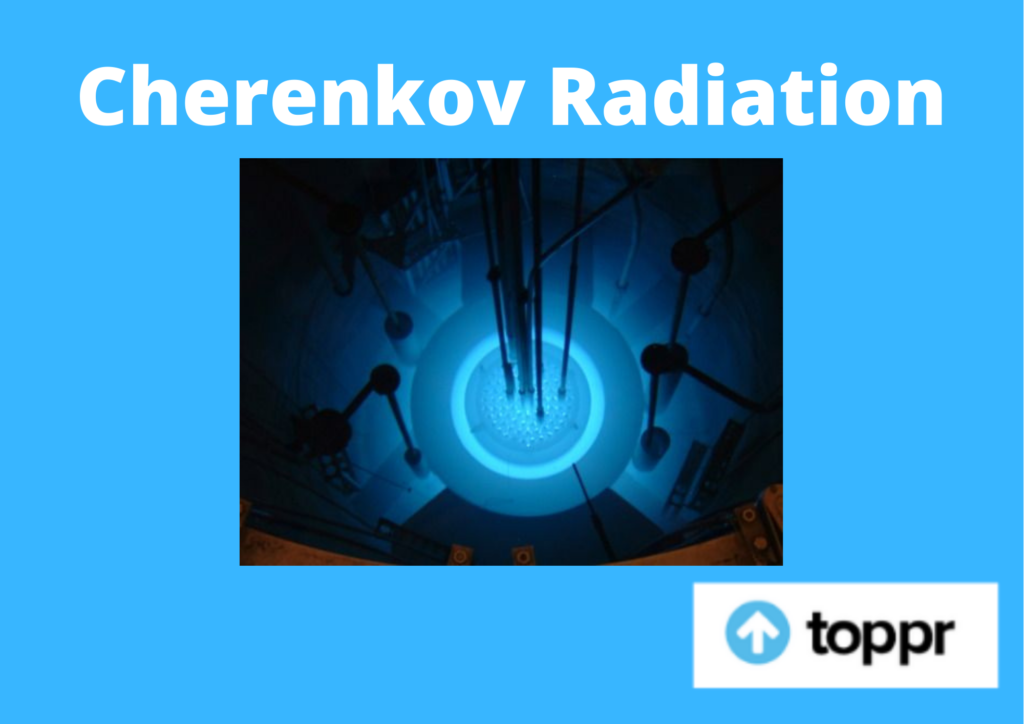 A brief flash of light produces when a particle carrying an electric charge travels faster than light in media like air and water. We refer to this flash of light as Cherenkov light. This effect has been named after Pavel Alekseyevich Cherenkov, a Soviet physicist, who was responsible for discovering this phenomenon.

When a high-speed electron will pass through a dielectric medium, the electromagnetic field will be disturbed and electrically polarized. A coherent shock wave is left in the medium in the wake of the particle.

The Cherenkov radiation commonly prevails in the ultraviolet spectrum. Moreover, it creates a constant spectrum, nothing like emission spectra which has spectral peaks.

Reason for Blue Water in a Nuclear Reactor

Now, the question arises, why is there any light at all? The fast-moving electrons excite electrons of water molecules. These excited electrons absorb energy and release it as photons as they return to equilibrium.

The shock waves which the particles travelling faster than light generate produce a constructive interference which we witness as a glow.

If you drop a pebble into a pond, a circular ripple will spread out on the surface of the water. If you continue to drop pebbles at regular intervals then a series of concentric rings all moving outwards with the same speed will form.

But, what will happen if you drop pebbles by moving your hand linearly in one direction or horizontal direction? It will create a series of circular waves that are no longer concentric yet rather crowded in the direction where you are moving your hand.

Cherenkov radiation has more uses than just to make the water glow blue in a nuclear lab. Some of them are:

Answer 1: Although Cherenkov radiation cannot enter the x-ray and gamma-ray portion of the spectrum, most of it is indeed ultraviolet. As a result, it can be harmful to someone who does not take any precautions to protect themselves.

Answer 2: This is one feature of Cherenkov radiation that it is usually in the ultraviolet spectrum, not bright blue; nevertheless it creates a continuous spectrum, not like emission spectra, which have spectral peaks.

Question 3: State one use of Cherenkov radiation.

Answer 3: We use it for detection of small amounts and low concentrations of labelled biomolecules. Radioactive atoms like phosphorus-32 are readily introduced into biomolecules by enzymatic and synthetic means and consequently, may be easily identified in small quantities.