What is the first thing you do when you feel cold? There are two possibilities here: either you cover yourself with a warm blanket or you rub your hands against each other to feel warm. Now, the question is why? How do our hands get warm when we rub them against each other? Well, ‘Friction’ is created by rubbing our hands that generates heat. This makes us feel warm. So, what is ‘Friction’? Why is it necessary? Let’s study more about it.

‘Friction‘ is a force that resists motion of sliding or rolling of one object moving relative to another. It is a result of the electromagnetic attraction between the charged particles of two touching surfaces.  We find and use it everywhere and every day whenever objects come into contact with each other. Although it always acts in the always acts in the direction opposite to the way an object wants to slide.

For example, we use car brakes if we want to stop or slow down because of the friction created between the brakes and wheels that slow/stop the car down.

The force of friction may alter depending on the following factors that affect it:

‘Rolling friction’ is the force that resists motion when an object rolls on a surface. Technically it’s not friction; its ‘rolling resistance’ since when a body rolls perfectly upon a surface, on paper, there is no sliding friction between that object and surface. But due to elastic properties in real life, both the bodies and the surface experience deformations due to contact between the bodies. Since the surface of contact is very small in real life hence the net normal force is also small and it is not enough like the static friction to prevent a body from sliding and keep it stationary and static friction increases with the increase in the external force; therefore rolling friction is usually less than the static. 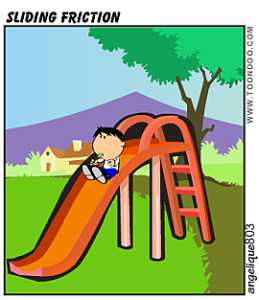 ‘Sliding friction’ is the frictional force between two surfaces that are rubbing against each other. It’s a very easy and common concept. It’s hard to find a perfectly smooth surface in the real life, therefore when an object slides on any surface, it undergoes a backward force because of the relative motion between the two adjacent surfaces. It always acts against the motion. For a static situation, the applied force that tries to slide the object is always equal to the force of friction acting on the object. There comes a certain moment that the object starts moving in the direction of the external force. This happens when we gradually increase the applied force. The force of friction that acts against the motion remains constant.

When fluid layers are moving relative to each other, a type of friction occurs which is known as ‘fluid friction’. The internal resistance to the flow of fluids is termed ‘viscosity’; in simple terms, the viscosity is nothing but ‘thickness’ of a fluid.

Q. Alida runs her toy car on a dry marble floor, wet marble floor, newspaper and towel spread on the floor. The force of friction acting on the car on different surfaces in increasing order will be: