Flowers are the reproductive parts of a plant. They are bright in colour and attractive to attract pollinators to it. Flowers can be present solitarily or in bunches or clusters. Clustered flowers can be found arranged on branches different from the other branches of the plant. These clusters of flowers are known as an inflorescence and each individual flowers in it are known as florets.

Parts of an Inflorescence

An inflorescence has the following parts:

a)Peduncle: It is the main supporting stalk of the inflorescence.

b)Pedicle: It is the stalk of the individual flowers. Some flowers are sessile and do not have a stalk, they are directly attached to the peduncle.

c)Bracts: These are small green petal-like structures that are found near the peduncle. They are similar to the sepals in a flower.

d)Flower/Flowers: These rest atop the pedicle or the main stalk.

It can be broadly classified based on the following:

They are commonly classified and studied under two categories: Racemose and Cymose inflorescence.

In this type, the axis of the inflorescence has unlimited growth. The flowers are arranged in acropetal manner which means that the older flowers are present at the base while the younger ones are present towards the top. The individual flowers may be sessile or pedunculate.

The different types of the racemose inflorescence are: 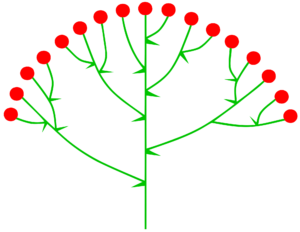 In a cymose inflorescence, the axis has limited growth and the flowers are arranged in a basipetal manner which means that the older flowers are found towards the top and the younger ones towards the base of the axis.

The different types of the cymose inflorescence are:

Q: Which of the following type of inflorescence has an axis with limited growth?

Axis with limited growth is seen in the cymose type. Drosera is a cymose inflorescence whereas the other three are racemose(have unlimited growth of axis). Therefore, the correct answer is option a.