There are 5 main states of matter: solid, liquid, gas, plasma and the Bose-Einstein condensate. Out of these gases are a special state. Their properties are easy to study. We see that gases follow certain laws known as the gas laws. These laws tell us about the behavior of gases. By that, we mean the values and relations of temperature, pressure and volume etc. Let’s see what these laws are.

In the periodic table of elements, we have the group of inert gases or permanent gases which are very unreactive. Their properties are very close to an ideal gas and hence their behavior resembles that of an ideal gas. On the basis of certain experiments using inert gases, the following laws governing the behavior of gases were established:

Suppose you have some Helium in a gas container at a low pressure and temperature. At a constant temperature, if you increase the volume of the container, the pressure of the gas will decrease. This is given by the Boyle’s law. 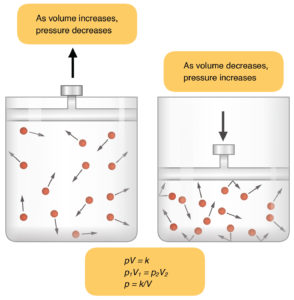 The constant is a proportionality constant. Its values depend on the mass, temperature and nature of the gas. If P1 and V1 are the initial values of pressure and volume of any gas and P2 and V2 are another  set of values, then we can say that

Since the mass, temperature and nature of a gas are same throughout, we say equation (2) and (3)  represent the same quantity. Thus we have:

A similar relation is found between Volume and Temperature of an ideal gas. We call it the Charle’s Law. This law states that at constant pressure, the volume (V) of a given mass of gas is directly proportional to its absolute temperature (T). 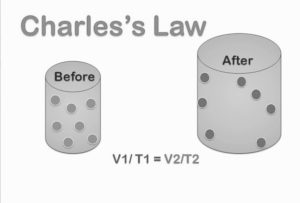 If V is the volume and T is the temperature of a gas at some constant pressure, then V \( \propto \) T or V/T = constant. Following the same method as above, we can write:

This law states that at constant volume (V), the pressure (P) of a given mass of a gas is directly proportional to its absolute temperature (T). We can write: P \( \propto \) T or P/T = constant. Also, we can write:

Hence the equations for such gases need modifications as discussed below.

The equation of state for a real gas can be written as:

where, a and b are Van der Waal’s constants.

Q: Assertion: If the pressure of an ideal gas is doubled and volume is halved, then its internal energy will remain unchanged.

Reason: The internal energy of an ideal gas is a function of temperature only.

Solution: A). Let P’ = 2P and V’ = V/2. Then from the equation of the state, P’V’ = nRT, we have from substitution PV = nRT. This shows that temperature doesn’t change and as the Internal energy of an ideal gas is a function of Temperature only, the internal energy of the gas will remain same.