Fossil fuels are available widely and don’t have any unwanted consequences on our environment. They include Hydroelectric Energy, Solar Energy, Wind Energy, Biomass Energy, Geothermal Energy and Tidal Power. So, you see that Geothermal energy is one of them. This article will focus on geothermal energy to offer you a better understanding. 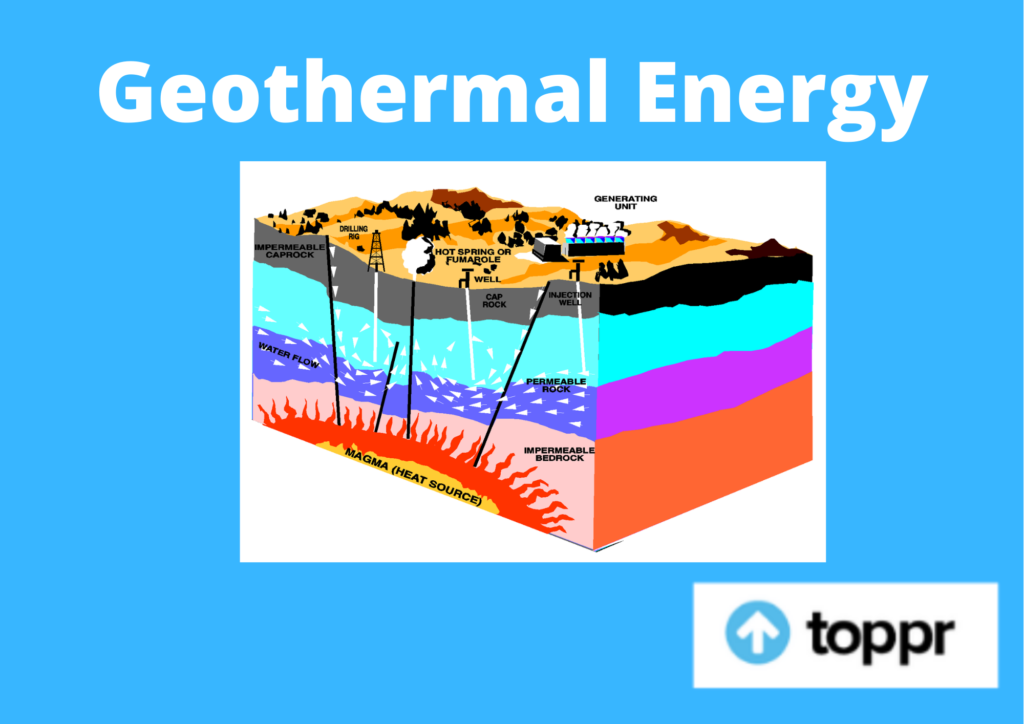 Geothermal energy is the thermal energy which generates and stores inside the crust of the earth. The earth’s centre is at the same temperature as the sun which is almost steady because of the constant process of nuclear fusion. Thus, some rocks melt because of this high temperature and pressure and cause upward movement of the mantle. These molten rocks which produce in the crust of the earth push upward and get trapped in particular regions which we refer to as hot spots. Moreover, when underground water comes in contact with the hot spot, steam generates.

As we have discussed before, the alternative energy sources are hydroelectric energy, solar energy, wind energy and biomass energy. The potential energy that is stored in the water is made to drive a water turbine that creates electricity, this kind of energy production is called hydroelectric power. Next, solar energy is one which we get from the sun and is quite a promising source. We control wind energy for pushing the wind turbine’s blade which connects to the electric generator to generate wind energy. Further, biomass energy is one we get from the waste of animals and humans.

Geothermal energy is one which generates from the heat within the earth. The hot rocks in the Earth’s core emit the earth’s surface with steam and pressure. We use this steam for running and producing electricity.

The difference in the temperature between the planet’s core and the crust is a geothermal gradient. It is the driving force for the constant conduction of thermal energy in the form of heat from the core to the surface. Sometimes, the temperature gradient may reach over 4000 °C.

For harnessing geothermal energy, we use a hydrothermal convection system. This procedure requires drilling a hole deep under the earth and then we insert a pipe. The steam which is trapped in the rocks routes through this pipe to the earth’s surface. Then, we use this steam for turning the blades of a turbine of an electric generator. Further, another method requires using steam to heat water from an external source which we use for rotating the turbine.

There are many applications of geothermal energy ranging from electricity generation to heating. Firstly, we generally install geothermal plants within a two-mile radius of the geothermal reserve. We use the steam from these reserves to rotate the electrical generator’s turbines or heat water to produce the steam.

In many cold countries, they use geothermal energy for heating greenhouses or heating water for irrigation. After that, it also has many uses in industries for food dehydration, milk pasteurizing, gold mining, and more.

Moreover, we also use it for heating buildings through district heating systems in which they directly transport hot water through springs to buildings via pipelines.

First of all, it is a renewable resource. It is free and abundant and because there is a constant flow of heat from the Earth, it is inexhaustible and limitless. In other words, it may be around for 4 billion years easily.

Further, it is non-polluting and environment-friendly. As there is no involvement of harmful gases, it is not lethal like fossil fuels. Most importantly, it does not leave any residue or create a by-product.

As geothermal power plants are extremely sophisticated, they require large scale research before we install them. Thus, it helps in creating employment for all types of labourers at almost every stage of production and management.

Finally, we can use it directly. As cold countries need it more, they use it for melting ice on the roads, heating houses, greenhouses, public baths and more. While the price initially may seem high, the maintenance and repair cost is minor.

A major disadvantage is of transportation and transmission. We cannot transport them easily like fossil fuels. Once we harness the tapped energy, we can use it efficiently in the nearby areas only. Similarly, there is the possibility of toxic gases emission in the atmosphere with the transmission.

Further, the cost of installation is really high. When you install a geothermal plant for getting steam from deep under the Earth, you will have to make a huge investment for material and human resources.

Moreover, it also requires intensive research. You must have thorough knowledge before setting up a plant to avoid the sit run out of steam over time because of temperature drop due to excessive or irregular supply of inlet water.

Another drawback is that the source of geothermal energy is limited to certain regions. Some of them are highly inaccessible too like high rise mountains and rocky terrains thereby making it economically infeasible.

Finally, as geothermal sites are present deep under the earth, the process requires a lot of drilling. Thus, too much drilling may cause release of highly toxic gases in the environment which can be fatal to the workforce and neighboring areas.

Answer 1: Geothermal energy is one which generates from the heat within the earth. The hot rocks in the Earth’s core emit the earth’s surface with steam and pressure. We use this steam for running and producing electricity.

Answer 2: There are quite a few disadvantages to this energy. Firstly, the procedure of injecting high-pressure streams of water into the Earth can cause minor seismic activity or small earthquakes. Secondly, geothermal plants can release small amounts of greenhouse gases like hydrogen sulfide and carbon dioxide. Thus, it will impact the environment badly.