Before we study height and distances we need to understand some terms.

An angle is a measure of rotation of a ray about its initial point. The original ray is called the initial side and the final position of the ray after rotation is called the terminal side of the angle. Vertex is the point of rotation.

If a rotation from the initial side to terminal side is 360th of a revolution, the angle is said to have a measure of one degree, written as 1°.

The angle subtended at the centre by an arc of length 1 unit in a unit circle whose radius is 1 unit is said to have a measure of 1 radian. It is another way of measuring any angle.

In a circle of radius r, subtends an angle θ radian at the centre and an arc of length l, 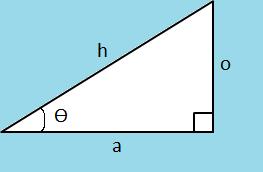 The line which is drawn from the eyes of the observer to the point being viewed on the object is called the line of sight.

The angle of Elevation

The angle of elevation of point P from O = ∠AOP.

The angle of Depression

The angle of Depression = ∠AOP

Solved on Heights and Distances

Solution:- Let the height of the tree be y and width of the river be x and CD = 40 m