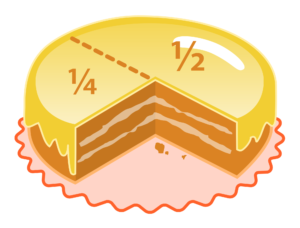 Fractions: The number which is of the form a/b, where b is not equal to 0, is termed as a fraction. In this case, a and b are termed as the numerator and denominator of the fraction. A fraction is also a rational number. So, the fraction will be,

The fraction represents some part of a number or a whole number generally. This number is divided into equal parts.

Thus, when a number is divided into ‘n’ number of equal parts, then one or more is termed as a fraction of that number.

The numerator defines a number that is equal parts and the denominator represents how many parts will that number make up to. Some of the points that you need to remember in the fractions are:

Also, reduce the fraction in its smallest form.

Different Functions of the Decimal Fraction

Similarly, repeat the steps for the division.

For LCM, first, make sure that the decimal point of each and every number is the same. Now, find the LCM of the numbers as if they are the integers. Follow the same procedure as you do in an integer. Also, for the result, do not forget to mark the decimal places equal to the ones given in the numbers.

For HCF also, follow the same procedure. Instead of LCM, you need to find HCF over here.

Q. Find the decimal of an hour which is second.