A cost that doesn’t change in a short term, irrespective of how the volume of production or the sales may change is the fixed cost. This cost is usually a constant cost for a basic operation of businesses or in other words it is a basic operating cost of a business which is crucial and can’t be avoided. The value of fixed cost determines the cost of the product and thus the profit and loss incurred by the business. 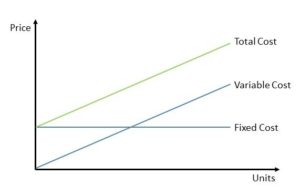 We can understand the fixed cost with the help of many examples. For example, if you are living in a rented place, you must have negotiated the cost of the place or the rent for a term that is on the rental agreement. This cost will not change as long as the rental agreement is valid. The rent is the fixed cost here. Similarly, another example is the property tax. Fixed costs are usually incurred at regular intervals (for example monthly rent) so sometimes we call them the period costs.

These are the costs that vary as the total cost to the organization when the output (number of items or services produced by the unit/business) varies. In other words, we say that a variable cost varies in exactly the same proportion as the output varies.

Thus we see that the variable costs are those costs which vary directly in proportion to change in the volume of production/output. Hence we can say that the cost which changes in the same proportion as the units produced, is the variable cost. Some of the examples of variable cost are direct expenses, direct labour, direct material etc.

We can understand the concept of semi-variable cost with the help of some of the following examples. For example, a popular cellular network provides you with a certain service for a fixed nominal charge. Say, for example, you get 1 GB data per day if you subscribe to a monthly plan of ‘x’ rupees. So this ‘x’ rupees is a fixed cost which will not change unless you start to use more data than 1 GB. In case your data usage exceeds 1 GB, the same company will charge you extra money. This charge will be proportional to the amount of extra data that you use. Let this extra charge be ‘y’ rupees per unit of extra data used. Then the cost of the final bill will be:

The semi-variable costs can thus be separated into two terms. The fixed cost portion and the variable portion. We write:

As a result, the semi-variable cost is also called the mixed cost and a semi-fixed cost.

Q1: The fixed costs are those costs which turn out to be ……………. at any volume of production output.

Answer: As we saw in the above section, “The fixed costs are those costs which turn out to be constant at any volume of production output.” Hence the correct option is a. constant.

Q2: Variable costs are those costs which vary in ……………. to change in volume of production/output.

Answer: The correct answer here is b. proportion.

Q3: ……………. costs are those cost of which some portion remains fixed at the given level of production.

Answer: The correct answer is b. Semi-variable.

Practice Questions For You

Q1: Period costs are charged against the ……………. of the relevant period.