Everything from the air around us to the food that we eat, a matter is composed of several elements, which act as the basic building blocks. Pick up any object around you and you would be surprised at the composition of that object’s matter. Going deep into the study of matter around us reveals many unique and interesting facts about the composition of matter.

Charting their own journey through history, elements have been known to be discovered from time to time. We have made such advancement through the course history that we now have almost 114 elements that are known to mankind, some of which are even man-made. So let’s learn about all these different elements.

Table of content
1 Suggested Videos
2 Elements
2.1 Browse more Topics under Classification Of Elements And Periodicity In Properties
2.2 Watch Videos on Symbols of Elements –
3 Some of the Theories for Classification of Elements
3.1 Prout’s Hypothesis
3.2 Dobereiner’s Triads
3.3 Newland’s Octaves
3.4 Lother Meyer’s Atomic Volume Curve
3.5 Mendeleev’s Periodic Table
4 A Solved Question for You

Defined simply, elements are the basic building blocks of matter around us. From time to time, new elements have been discovered which have brought to light, many properties of objects around us. 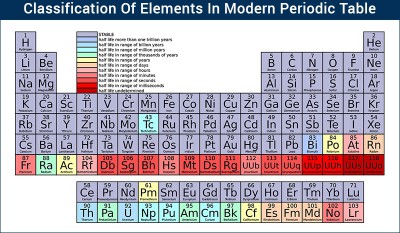 As newer elements have made their way in common knowledge of mankind, it becomes difficult to study each and every element in individual terms. Thus, it makes sense to categorize these into several subgroups, so that their study can be carried out in an efficient manner. This is why the concept of classification comes into shape.

Watch Videos on Symbols of Elements –

Some of the Theories for Classification of Elements

Some of the early attempts to classify them include the following theories:

First of all, came the Prout’s Hypothesis. Devised in the year 1815, hydrogen was regarded as the ‘central’ element around which all other atoms were made.

This theory came to light in the year 1829. According to the theory, the classification was made in such a way that each group consisted of three elements such that they owned the same properties. Also, in each case, the atomic weight of the middle element is supposed to be the arithmetic mean of the other two elements.

However, this theory suffered a major limitation as Dobereiner could classify only 9 elements in such manner, out of all that were known at the time. Therefore, new theories had to be introduced.

However, this theory could only apply up to the element calcium, after which, it failed to hold true for the others. Also, noble gases that were discovered later completely disturbed the existing arrangement. As a result, new arrangements had to be introduced.

The law came in the year 1869 and expressed the existing elements in the form of a curve between the atomic mass of the element and atomic volume. As per this theory, Lother concluded that all elements which hold the same properties came to occupy the same position on the curve.

At the time of Mendeleef, only 63 elements had been discovered. He deduced that the physical and chemical properties are a periodic function of their atomic masses. Therefore, Mendeleev presented a systematic way to study existing elements.

He also allowed spaces for elements that were yet to be discovered, which proved to be a very practical way. However, there were some limitations with his theory nevertheless. His position of hydrogen in alkali metals and unjustified position of certain elements proved to be a limitation of his theory. Consequently, modern arrangements came into existence.

Q: Describe the structural features of the modern periodic table. Are there any limitations in this table?

The sixth period consists of 32 elements in all and is the longest period in the table. As of now, the seventh period is still incomplete and contains 19 elements. Each vertical column is known as a group. These groups include alkali metals, ore-forming elements, alkaline earth metals, halogens and noble gases.

The modern periodic table suffers from several limitations. In the table, the position of hydrogen continues to remain ambiguous. Inner transition elements are placed separately in the table as they do not find any position in the table. Nevertheless, the position of an element in the periodic table can be predicted easily. You can do this using electronic configuration of the element and the number of electrons in the valence shell. As a result, it helps in knowing the period of the element.