Relation of Heat with Different Parameters

Heat should not be confused with temperature but they can directly be related. Temperature is the measure of a degree of hotness or coldness.

Heat energy flows from one body to another body due to the difference in temperature. Heat transfers from a warmer object to the cooler object I.e. from higher temperature to lower temperature. It continues until both objects gain same temperature I.e. equilibrium is achieved.

Many units for heat are devised. The standard unit I.e. SI unit to measure heat is Joules(J). The quantification of heat due to change in temperature is called calorimetry.

Learn more about the Transfer of Heat in more detail here.

A thermometer is an instrument which is used for measuring temperature of a body. The first invention to measure the temperature was by Galileo. He invented the rudimentary water thermometer in 1593. He named this device “Thermoscope”. This instrument was ineffective because water froze at low temperature. 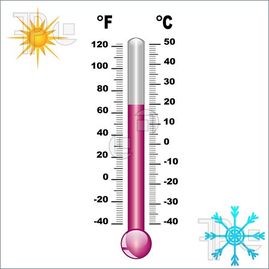 In 1974, Gabriel Fahrenheit invented the mercury thermometer. A mercury thermometer consists of a long, narrow and uniform glass tube called the stem. The scales on which temperature is measured are marked on the stem. There is a small bulb at the end of the stem which contains mercury in it. A capillary tube is there inside glass stem in which mercury gets expanded when a thermometer comes in contact with a hot body.

These thermometers are used in homes, clinics, and hospitals. These thermometers contain kink which prevents mercury to go back when it is taken out of patient’s mouth so that temperature can be noted down easily. There are two temperature scales on either side of mercury thread, one is celsius scale and other is Fahrenheit scale. 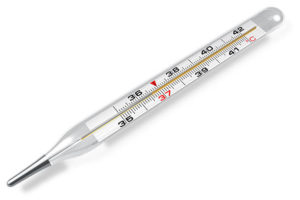 It can give temperature range from a minimum of 35°C or 94°F to the maximum of 42°C or 108°F. Fahrenheit scale is more sensitive than Celsius scale. Thus, the temperature is measured in Fahrenheit(°F).

Laboratory thermometers can be used to notice the temperature in school labs or other labs for scientific research purposes. These are also used in industries to measure the temperature of solutions or instruments.

Question: Mercury is widely used in clinical thermometers because:

Solution: Mercury is widely used in clinical thermometers because, it expands uniformly at all temperatures, hence it can help us to measure the temperature accurately. Also, it has a constant coefficient of expansion.