At the point when the transactions are vast their account by methods of the journal entry for each exchange identifying with the bills turns out to be a very tedious and tiresome exercise. For this situation, they are recorded independently in unique subsidiary books. The bills receivables in the Bills Receivable Book and the bills payable in the Bills Payable Book. A crucial point regarding bill receivables and bills payable books is that they don’t record the transactions identifying with the bills. For example, identifying with bills discounted, endorsement, retirement, renewal and so forth, basically, have a passing reference in these books.

It is utilized to record the full subtle elements of bills got from clients and others. Every one of the points of interest of the bill-date, acceptor’s name, sum, term, place of payment, and so on are entered in the bills receivable book for introduction and further reference.

The performa of a bills receivable book is given below

The bills receivable book, similar to some other subsidiary book, is totaled intermittently.

This total is charged to the “Bills Receivable Account” although the account of each individual indebted person whom the bills received is credited in the books.

The Bills Receivable Account is the account of an asset and would in any condition have a debit balance. This equalization on any date would show the number of bills receivable un-matured and on hand. 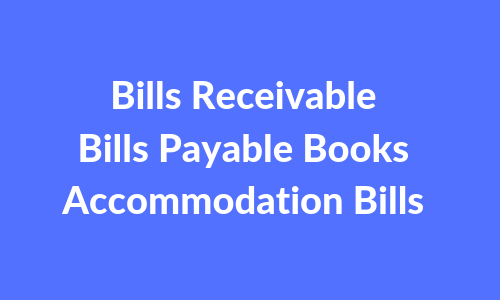 It is kept up like a bills receivable book. It is intended to record every one of the detailed elements, identifying with the bills acknowledged by an entity or a party, which are held for being utilized later on, in the event of need.

The performa of a bills receivable book is given below

Entries are made in the bills payable book at whenever bills payable are acknowledged. Quickly, the individual account in the record is debited.

Learn more about Bills of Exchange and Promissory Notes in detail.

More often than not, bills of exchange or promissory notes are drawn to finance the real exchanges in goods. An acknowledgment is made to settle a trade debt owing to the drawer by the drawee in case of a bill of exchange. The bill is called a trade bill.

As it begins from real trade transaction it is for value got and is enforceable. Be that as it may, aside from financing transaction in products, bills of exchange and promissory notes may likewise be utilized for raising finance temporarily.