In the business world, bills of exchange are an important tool to facilitate transactions and deals. It is hence important to learn about them and their terms. Let us learn about Maturity, Discounting, Due Date and Endorsement of Bills.

Table of content
1 Suggested Video
2 Bill of Exchange
2.1 Browse more Topics under Bill Of Exchange
3 Maturity of Bill and Due Date
4 Discounting of Bill
5 Endorsement of Bill
6 Solved Question for You

Transactions are the cornerstone of the business. They occur on a daily basis in every business. As business is based upon transactions, they are either done in cash or credit. A cash transaction is an upfront and immediate. Whereas, credit transaction is done in the future.

To support the assurance of payment in the future, the seller urges the buyer to sign an agreement known as Bill of Exchange. It is a legal writing written by one side (maker or drawer) ordering the other side (payer or drawee) to pay a certain amount within or on the decided date.

A bill of exchange is issued by the lender (creditor) upon his debtor (indebted person). It needs to be acknowledged by the drawee (debtor) or somebody on his behalf. It is only a draft until its acceptance is confirmed. 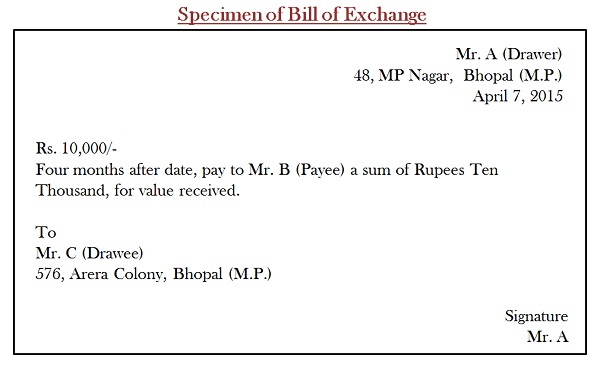 Maturity of Bill and Due Date

Here we will learn about the maturity of the bill of exchange. In the commercial world maturity means ‘date when payment is due’. The date that comes after adding the 3 days of grace to the due date of the bill is known as ‘date of maturity’.   To understand the maturity of bill better, first, you need to under the concept of a due date.

Question. State 3 essential features of the bill of exchange